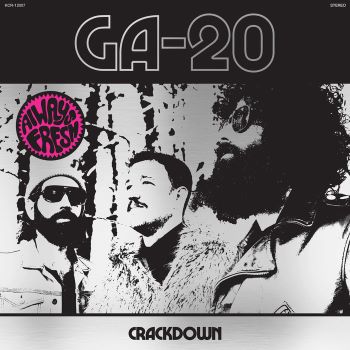 We were first introduced to blues trio GA-20 last year via their second album, a tribute to blues man Hound Dog Taylor. Taylor (real name Theodore Roosevelt Taylor) was a classic Chicago electric bluesman. Oddly he suffered from polydactyly – a condition that left him with six fingers on both hands! Blues legend has it that he  sawed off the extra digit on his right hand with a cutthroat razor to make playing guitar easier. Sadly, despite that painful sacrifice,  he never quite made the blues major league, and  though he was a mainstay on the Chicago circuit, he died relatively unknown in 1975.

GA-20 (guitarist Matt Stubbs, guitarist/vocalist Pat Faherty, and drummer Tim Carman) were attracted by that story and built their sound as a contemporary take on the electric blues of Chicago and you can hear plenty of that on their latest album, ‘Crackdown’ which is due for release on Colemine records in September..

‘Easy On The Eyes’ , for instance could’ve come out of late 60s Chicago – think Muddy Waters’  famous ‘Electric Mud ‘music .’I Let Someone In’ offers more of the same – big guitar riffs and tortured vocals. But the album offers other flavours too. ‘Dry Run’ is a jaunty, old school, rolling blues  and quite restrained compared to the album’s overall soundscape. “Restrained” is not the word we’d use to describe the rough, tough opener ‘Fairweather Friend’ or the frantic garage rock sounds of ‘By My Lonesome’ and the percussive ‘Double Gettin’’.

GA-20 are committed to maintaining the blues tradition while delivering it in a contemporary setting. To that end, they use vintage instruments and equipment and play live as often as they can  and that proud and  fierce commitment to the genre shines through on the 10 tracker that is ‘Crackdown’.