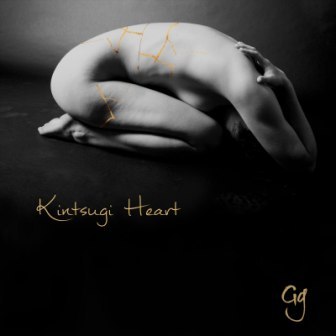 Over the last several years, GIGI HAROLD has won plenty of followers in and around the London music scene with her special take on blue-eyed soul with a hint of jazz. Her 2018 album ‘4am Angel’ was particularly well received and GG (the name she uses professionally) has just released the follow up collection – the oddly name ‘Kintsugi Heart’.

Superficially “odd” but the explanation is (we think!) this. GG tells us that the 14 tracker is “written from her heart” and that the songs “weave stories of love and loss”. Well “kintsugi”, we’ve learned, is an ancient Japanese tradition, that encourages people who accidentally break something precious – an ornament, a vase, a glass … whatever, to piece it together again. Maybe not perfectly – but there are special crafts people who will take on the job. They put the objects together again and leave the repairs visible – often spraying them with resin – even powdered gold. The result is, we’re told, beautiful. Kintsugi means “golden joinery” in Japanese and (we think) GG’s album is the story of a broken heart being put together again, but leaving some scars and traces of the past relationship.

Enough of the philosophy – what does the album sound like? Well… classy blue eyed soul with just a garnish of smooth jazz. Best reference point, I guess, is Swing Out Sister. GG sounds nothing like Corinne Drewery; her voice is tougher, more strident – unusual even. But the overall soundscape is similar… most obvious on the lovely ‘Why’ which features some lovely muted trumpet. It’s an album highlight. The beater that is ‘Smile On My Face’ is another good ‘un while the opener, ‘Come Along With Me’ mines a proper cool, soul groove. ‘Take Some Time’ is more experimental while he closing ‘Souvenir’ offers some variety. This is a stately Latin-inflected cut with some French lyrics… tres bien!

‘Kintsugi Heart’ truly embraces the beauty in the broken but if you want to investigate, you’ll need to be quick – the album is out now – but it’s limited to just 300 physical copies!