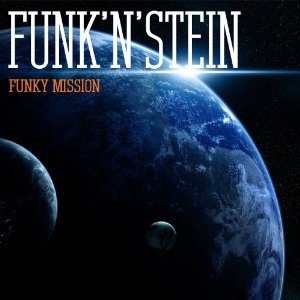 For their last release of 2010, Soul Unsigned depart from their usual compilation format to issue what is their second single artist set, By “single artist”, though, here we mean “band”. Funk ‘N’ Stein you see is an eleven piece aggregation from Israel, though listening, you might be forgiven for thinking that the band’s home base is Oakland because in places there’s an uncanny feel of Tower Of Power to their sound. Like TOP, Funk ‘N’ Stein boasts a large horn section and on the up-tempo cuts – like ‘Funky Mission’, ‘Dog And Cat’ and ‘That’s Funk’ there’s a sharpness and discipline that is the hallmark of all true funk bands.

The band though are savvy enough to know that a whole LP of blistering funk can be hard to digest in one sitting so they temper the power with some sweeter mid tempo tunes. ‘Choose Your Way’ and ‘All Day Long’ are particularly attractive and maybe the best reference point might be mellow mood Jamiroquai. That Jamiroquai feel is even more apparent on the spacier ‘Blue Lights’ … a real ethereal feel to this one. ‘I Want Your Love’ is much more romantic and features a live string section, while for added variety there’s a hard-to-pigeon-hole instrumental in ‘If 6 Was 8’… smooth jazz, maybe… but flavours of those romantic interludes that peppered blaxploitation soundtracks too.

So, a lot going on in this ten tracker and all the flavours come together on the eight minute plus closer, ‘The Morning Hush’. It’s a slow starter this one, but listen how it builds to a wonderful climax– a great ending to a very good album. My only criticism is in the band’s name. The whole Funk ‘N’ Stein thing has been done before and to soul folk it brings connotations of the whole George Clinton funk circus. Those who were never into those left field musings and off the wall ramblings might turn away from this new age Funk ‘N’ Stein because of that… and what a shame that would be, ‘cos there’s plenty of “proper” soul in here.