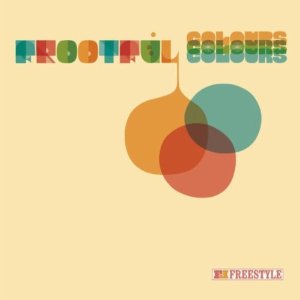 Frootful is the alter ego of guitarist Nick Radford and ‘Colours’ is his debut. In his CV Nick cites people like Grant Green, Kenny Burrell and Boogaloo Joe Jones as major influences and it’s that kind of sound that dominates this 12 tracker. Using vintage instruments and analog recording equipment, ‘Colours’ does manage (in places, at least) to recreate that special soul-jazz feel. ‘Hawt Sauce’, ‘Soul Clap’ (not the Booker T tune, by the way) and ‘Latin Strut’ have that special “big” guitar feel to them. Best of the guitar workouts though is ‘Take Me There’ which is an elaboration on the Staples’ ‘I’ll Take You There’. Interesting too is the album’s title cut, on which Radford shows that he’s a dab hand on the vibraphone too.

But ‘Colours’ boasts other flavours besides. Those who know the Bamboos will notice a similarity between their music and Frootful’s ‘Fish In The Sea’ and ‘Slowtime’. Both boast a vocal from Angeline Morrison, though the melodies in both songs aren’t that memorable. ‘Astronaughty’ is different again. As the title might suggest, it has an electro undertow though it manages to be funky too. Best cuts on the album are the final two tunes – ‘B-Side Seaside’ and ‘Young And Frootful’. The former is a gentle instrumental while the latter is a ska- flavoured version of Young Holt’s ‘Young And Holtful’. The original of that one was, of course, a revisiting of ‘Soulful Strut’; here it mines an infectious  summery groove that is a real delight.