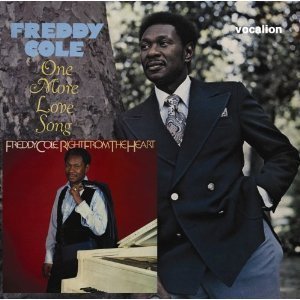 Freddy Cole is one of those artists who’s maybe more famous through family connections than for his own achievements. The 80 year old Chicagoan is, of course, the brother of Nat King Cole and the uncle of Natalie but he’s enjoyed a long and distinguished career of his own – steadfastly refusing to trade too heavily on that famous family name. He currently leads his own quartet and still tours regularly performing songs from the numerous albums he’s recorded over an incredible 60 year career. For a time, in the 70s, Freddy recorded in the UK – working for Dutch entrepreneur, Martin Basart and his three “British” LPs have become in-demand collectors’ items. Two of those sets – ‘One More Love Song’ and ‘From The Heart’ – have now been reissued in this lovely little twofer from Vocalion Records.

‘One More Love Song’ was recorded in 1978. It’s a ten track collection of classy pop and soul songs delivered in a late night, sophisticated jazz lounge setting. Cole’s then mentor, Basart, spared no expense with the recording – using a mighty 52 piece orchestra and 6 backing vocalists creating a lush sound that has travelled down time in good shape. Standout cut is the LP’s title track. ‘One More Love Song’ was written by one time Motown staffer William “Mickey” Stevenson and it’s a sweet and gentle affair. A cover of Bill Wither’s ‘Hello Like Before’ is outstanding too.

The second album in this collection, ‘Right From The Heart’, offers more of the same, though there are a few more up-tempo moments – notably a cover of John Paul Young’s disco-lite ‘The Day That My Heart Caught Fire’. Another oddity is a take on Kenny Roger’s ‘She Believes In Me’. Freddy’s delivery though salvages it from its old country style lugubriousness. Much better is Freddy’s treatment of the standard of ‘Teach Me Tonight’ – a recording that sums up the art of Freddy Cole… classy and sophisticated with hints of his brother’s sound and style, but – more tellingly maybe- more akin to the texture of Billy Eckstine, whom Freddy always acknowledges as his hero and biggest influence.