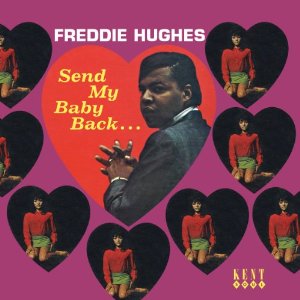 Californian Freddie Hughes possessed one of the sweetest true soul voices ever recorded in the 60s but for all kinds of reasons he never really made it out of the local, minor leagues. This lovely, new 24 tracker (the first legitimate CD issue of his work) goes part of the way to explain – and even if you don’t read all the in-depth notes, a glance at the track list and credits fills in most of the story. You see, Freddie not only recorded in his own right also but as part of the Casanova II, The Soul Brothers and The Music City All Stars; thus it was hard for him to establish a strong identity of his own. That he didn’t was probably down to his own enthusiasm to sign deals with any music biz entrepreneur who offered him one… and as you’d expect, said suited men wouldn’t be too bothered at exploiting Freddie’s talents to their own ends.

Such is the story of a lot of 60s soul singers and young Freddie’s musical story begins – surprise, surprise – in the church.   When the devil’s music beckoned he gigged with various small groups before recording with the Soul Brothers who (this gets complicated) also doubled as the Music City All Stars. The sound was heavily influenced by the Impressions and why Curtis Mayfield didn’t sue over the plagiarising of his ‘It’s All Right’ on ‘Let Our Love Go On’ we’ll never know. The song’s included here along with an energetic ‘Do The Philly’ and a clutch of previously unissued recordings. From there Freddie worked as part of the Casanova II (with Willie Trass) and this album features a quartet of tracks from the duo.

In 1967 Freddie went solo and recorded a wonderful mid-tempo ballad called ‘Send My Baby Back’ for Wee Records. The single was picked up by Wand/Sceptre and reached #20 on the R&B chart and logically Wand wanted an album to cash in with – and it’s that album that provides the bulk of this collection. Musically, it’s fab uptown soul all the way with ‘Send My Baby Back’ still sounding superb. ‘I Gotta Keep My Bluff In’ is superb too, as are covers of the Temptations’ ‘You’re My Everything’ , the Vandellas’ ‘What Am I Going To Do Without Your Sweet Loving’ and Aretha’s ‘Natural Woman’ (renamed ‘Natural Man’ here). The Bacharach-esque ‘He’s No Good’ shouldn’t be overlooked either. Sadly , despite the excellence of the music the LP bombed and Freddie went back to the California club circuit. He still works today – solo and with a group called Kicking The Mule – but it’s doubtful if he’ll ever recreate the magic of the 60s vintage soul on offer here.