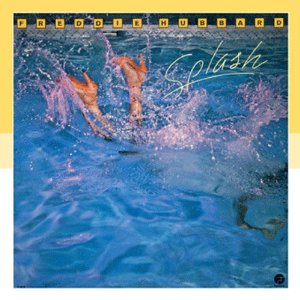 Poor old Freddie Hubbard: he took a lot of flak – some of it vicious – from the jazz police when he embraced funk and pop and his music moved into fusion territory in the 1970s, first at CTI Records and then later at Columbia. Reissued for the first time is Hubbard’s final fusion foray, 1981’s ‘Splash,’ his debut for the Fantasy label following his departure from Columbia. Jazz purists will hate this set for its pronounced pop/soul emphasis and seeming lack of improvisation but soul fans who like a bit of smooth jazz on the side will lap it up.

‘Splash’ is probably the smoothest of all of Hubbard’s fusion records and includes four tracks featuring soulful lead vocalist, Jeanie Tracy. The best of them is ‘You’re Gonna Lose Me,’ a svelte, moody, mid-tempo dancer that has been championed by the UK’s Modern Soul scene. It builds slowly on the verse section, which is underpinned by a loping groove, and then eases into an infectious chorus where Jeanie Tracy’s impassioned vocals are superb. ‘Splash,’ the opener, also features Tracy’s vocals, as do the mid-tempo ‘Touchdown’ and ‘Jarri,’ though certainly the vocals don’t eclipse Hubbard’s stellar trumpet playing, which is always arresting.

Hubbard co-produced the set with Al Hall and together they corralled the hottest R&B session players to work on the record, including guitarists Paul Jackson Jr and David T Walker, Clarence McDonald and former Tower Of Power man, Chester Thompson, on keyboards, Freddie Washington on bass and James Gadson on drums. The end result is a very slick, polished, record and typical of proto-smooth jazz LPs in the early ’80s. Three instrumentals punctuate the vocal tracks; ‘Mystic Lady’ is a mellow ballad, ‘I’m Yours’ is a breezy uptempo number featuring Hubbard on flugelhorn and some deft improvisation on the song’s simple, catchy melody while ‘Sister ‘Stine’ bubbles along blithely with a funky rhythmic undertow.

In terms of fusion, ‘Splash’ was Hubbard’s swansong in that much maligned of musical genres. After that he returned to straight ahead jazz. Though jazz critics are likely you give it a one or two star rating, this album is much, much better than that. It’s an album that soul fans, rather than jazz buffs, will enjoy and appreciate. And if this takes your fancy, check out BGO’s fresh reissue of Hubbard’s mid-’70s Columbia albums ‘High Energy,’ ‘Liquid Love,’ and ‘Windjammer’ in a single, 2-CD package.