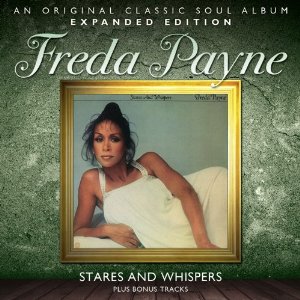 Detroit’s Freda Payne will, of course, always be defined by ‘Band Of Gold’. The song is her albatross; but soul folk know that the lady did actually have a career before that and – as importantly – recorded prolifically after it. This new soulmusic.com reissue on the lady comes from that post-Invictus period. More specifically, it’s her 1977 debut for Capitol Records for whom she’d signed after a spell with ABC. Freda had been wooed to the label by Larkin Arnold who, it seems, saw in her his outfit’s answer to the likes of Diana Ross and Donna Summer. Arnold spared no expense for Freda. He brought in top producers, arrangers, writers and session players to craft her debut. The cast list is a who’s who of who was what in the mid 70s…. Frank Wilson, Tony Camillo, David Van De Pitte, Greg Phillinganes, Jack Ashford, Michael Boddiker, Greg Poree, Nathan Watts, Oscar Brashear, Chuck Finlay, George Bohannon, Ernie Watts, Angela Winbush and the remnants of Wonderlove all feature on the album! Sadly, though, the end result doesn’t quite add up to the potential sum of its parts.

I alluded to the reason why a sentence or two ago. Larkin Arnold clearly wanted a slice of the Ross/Summer action and working to that particular template clearly hampered all concerned. It’s obvious from the start. The opener – ‘Master of Love’ – says it all. A dramatic pastiche of the then best of Ross and Summer, it boasts sweeping rhythm changes and grandiose lyrics. There’s more of the same on the discofied ‘Love Magnet’ while ballads like ‘Loving You Means So Much To Me’ recall the simpering of La Ross. Best cut on the 7 tracker is the title cut – a sweet and tender ballad on which Freda does her own thing. It wasn’t enough though to prevent the album garnering only moderate sales. With this reissue we can now judge the judgement of ’77 and as a bonus this new CD adds three extras. One cut – ‘I Can’t Live On A Memory’ (a Capitol single B-side) – is dispensable disco, but the other two are outstanding. ‘Baby You Got What It Takes’ harks back to Freda’s early, jazzier days. It’s a great swinger – just bettered by ‘I Wanna See You Soon’. This one is a gorgeous collaboration with label mates Tavares. It has just a hint of ‘Backstabbers’ about it– but that’s no bad thing and it should convince you to at least investigate the album.