FREDA PAYNE: Come Back To Me Love (Artistry) 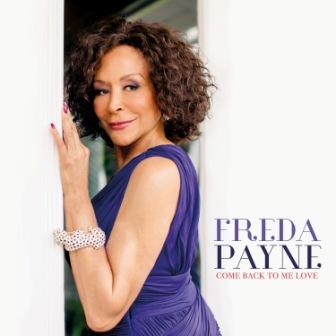 Freda Payne will be forever known for her 1970 world-wide hit ‘Band Of Gold’. The bitter-sweet, infectious slab of pop/soul was, of course, one of the records that helped launch Holland-Dozier-Holland’s post Motown success and established Freda as a soul celebrity. Few people who bought ‘Band Of Gold’ –or indeed have enjoyed it since – realised that Ms Payne began her career as a jazz singer. Aged just 14, she débuted with the Jimmy Wilkins Big Band, recording for Impulse and then MGM. Amongst other jazz luminaries figuring in Freda’s CV are Benny Golson, Billy Eckstine, Quincy Jones and Duke Ellington who composed ‘Blue Piano’ just for her.

The albatross that was ‘Band Of Gold’ kept Freda on the soul circuit and she still regularly treads the oldie tour route. Now, though, she seems ready for a change of direction with a new album on which she revisits her jazz roots. ‘Come Back To Me’ (recorded in her home town, Detroit) is a 14 track homage to the music that she cut her teeth on – big-band accompanied, string-laden songs, interpreted in the lounge jazz mode.

Eight of the songs on the album are standards that have long been Payne favourites and she clearly relishes the opportunity to sing stuff like Cole Porter’s ‘You’d Be So Nice To Come Home To’ and Johnny Mercer’s ‘Midnight Sun’. The more poignant songs – like ‘Guess I’ll Hang My Tears Out To Dry’ and ‘Spring Can Really Hang You Up The Most’ are delightful… album highlights.

The remaining songs are collaborations between Mack Avenue label boss Gretchen Valade and Tom Robinson and between them they make a decent fist of recreating the flavour of the Great American Songbook. ‘Lately’ is particularly strong and ‘You Don’t Know’ has a great in-built swing to it matching the great arrangement that the team cook up on a version of the old blues ‘I’d Rather Drink Muddy Water’.

‘Band Of Gold’ will rightly remain a soul classic, but with this new venture Freda has finally, it seems, broken free.