FRED WESLEY: With A Little Help From My Friends (BHM) 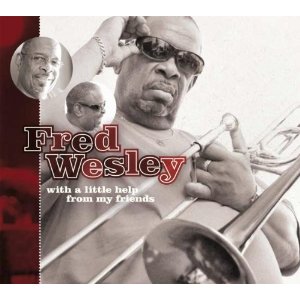 Of all the graduates of the various James Brown bands, my guess is that Fred Wesley has been the most pro-active in pursuing a career beyond Brown. He’s worked all over the place and with all kinds of artists; he’s collaborated/guested on dozens of varied recordings and cut a slew of his own solo sets. He gigs regularly and seems to have found a semi-permanent home in Europe where he’s become an almost ever-present on the flourishing festival scene. Indeed this new LP was recorded in Europe … Germany to be precise. The title has nothing to do with the Beatles by the way; its provenance is down to the friends and family who encouraged the recording and worked on it with him.

Guest-in-chief is Swedish trombonist Nils Landgren. His main contribution is on the tune that defines the album’s overall sound – ‘Swedish Funkballs’. It’s a pleasing, brassy roller that might remind you of Wayne Henderson-era Crusaders – not quite funky, not quite smooth jazz… but with its own discrete charm and certainly tastier than IKEA’s meatballs, at which, I’m sure the tune is cocking a snook. There’s more of the same sound on ‘Spring Like’ and the slinky ‘Beautiful’. Variety comes in the shape of two semi-spoken pieces – ‘Ashes To Ashes’ (inspired by last year’s ash cloud debacle) and the tale of life on the road – ‘Everywhere Is Out Of Town’. Funkiest cut is ‘Homeboy’ – hardly surprising since it’s an old Maceo tune, while ‘Obamaloo’ is a musical tribute to you know who. In the notes Fred chooses ‘Palm’s Up’ as his favourite track and I’m inclined to agree. It’s a lovely mid-tempo groove with a hint of Latin about it and some fine piano from Peter Madsen. It really works, which is more than can be said for the ambitious closer – ‘Peace Fugue’. Here Fred’s mellifluous trombone is quiet at odds with the rocky guitar of Reginald Ward. But it’s still a Wesley horn and good to hear the great man’s son, Victor, on trombone too… he’s a lot to live up to!