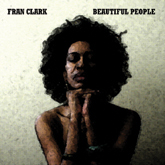 Based in West London, Fran Clark is soul singer/songwriter with a CV that includes session work with Matt Bianco and Oliver Cheetham. From sessions Fran graduated to a covers band that worked the London pub/club circuit. Then she worked in a duo with her husband – bassist Pete Clarke… the pair going on to open their own recording studio. It was there that Fran recorded her debut set, ‘To Fly’. The album was well-received on the London soul underground and, encouraged, Fran’s just released this – her second long player and the 11 tracker’s a mature and thoughtful piece of work.

Laid-back and mostly mid-tempo, ‘Beautiful People’ is an adult album that brings rewards after several plays. The cut that seems to best sum up the album’s mood is ‘Maybe Never’. It’s a gentle four minutes worth of reflection. It boasts a simple, yet never predictable melody and Fran caresses her lyric with a real belief. Listen up too to the understated harmonies courtesy of Josie Bannis and Winston Ward. ‘Just Listen’ (great title for an opening track) is another album highlight. Jazzy and languid, it features some great keys from jazz veteran David Frankel. Indeed Frankel’s piano is a consistent pleasure and his jazz background is apparent on tunes like ‘The River Is Wide’ and ‘Alright By Me’… though on the ballad ‘To Fly’ the palette is bluesier and the more intriguing for that.

Fran is busy promoting the album in and around London and you can learn more about the lady, her music and her shows @ www.franclark.co.uk