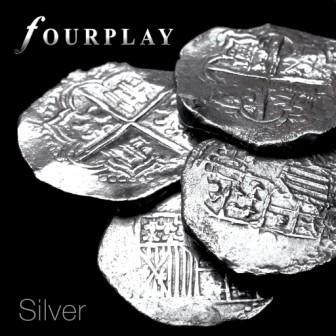 Super smooth jazz group Fourplay are currently celebrating their 25th anniversary … and what better way to mark the occasion than with a new album, appropriately called ‘Silver’ – a ten tracker where no less than six of the tracks offer a play on the word “silver” in their titles.

After making music for two and a half decades fans of Fourplay (Nathan East, bass; Bob James, keys; Chuck Loeb, guitar; and Harvey Mason, drums… in case you’d forgotten) will know exactly what to expect here. Yep – a superior collection of smooth jazz tunes; nothing too demanding or taxing with each member being allowed to shine as and when the tune demands. For instance the opener ‘Quicksilver’ is a showcase for Loeb… it’s his tune after all, while the closing ‘Windmill’ sees James take centre stage with his typical understated sparkle. But whoever’s up front, the sound is typically “Fourplay” – the one exception, maybe, being ‘Precious Metal’ – which features some lovely, lush sax from the ever-dependable Kirk Whalum.

Sonically the music goes from the languid ‘Horace’ (James’ tribute to Horace Silver) through to the lively ‘Silverado’ – which is about as funky as Fourplay ever get – with all shades of smooth in between.

Fourplay will be in the UK in October, performing at Ronnie Scott’s on 21st and 22nd.