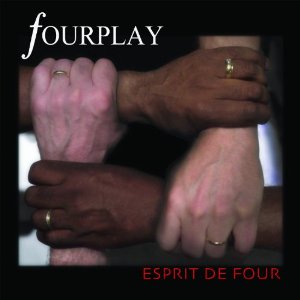 Premier smooth jazz outfit Fourplay have been in business since 1991 when keyboard doyen Bob James set to work with drummer Harvey Mason, bassist Nathan East and guitarist Lee Ritenour to craft an album which successfully blended jazz with soul, R&B and pop. The success of that self-titled set encouraged the foursome to continue and though there’s been the odd personnel change (Larry Carlton replaced Ritenour in the mid 90s and Chuck Loeb replaced Carlton in 2010) the Fourplay sound remains essentially the same – that gentle, often soporific mix of light jazz and soul grooves that proved so effective back in ’91.

The ten tracker that comprises this new ‘Esprit De Four’ album follows the same template as most other Fourplay sets. As ever all four members contribute to the writing process with Chuck Loeb’s ‘December Dream’ kicking things off. It really is a definition of the Fourplay sound – quiet and understated but with a soulful depth that shows itself after a couple of plays. Loeb’s other contributions are the more upbeat and percussive ‘Sonnymoon’ and the laid-back ‘Logic Of Love’.

Nathan East is credited with two compositions – the loose and jazzy ‘Firefly’ and the lazy ballad ‘All I Wanna Do’ on which he takes lead vocal too… it’s a wonderful piece of late night romance saved from a sentimental overdose by a great but brief James’ piano solo and some bluesy playing from Loeb.

Harvey Mason is responsible for the LP’s title track – another cut that defines the band’s sound, and the lengthy ‘Venus’ which is built around an interplay between James and Loeb… quite ethereal.

Bob James wrote the album’s focal point – the dramatic ballad, ‘Put Our Hearts Together’. His response to 2011’s devastating tsunami, its poignant, restrained drama recalls the creations of Stephen Sondheim – a feeling more apparent, maybe, in the vocal version (words by daughter Hilary) sung by Japanese pop superstar Seiko Matsuda. James’s other contribution, ‘Sugoi’ is also influenced by Japan. It’s a simple piece – the album’s most basic; it’s what James intended. ‘Sugoi’, we’re told, means ‘nice, I like it’… and despite its inherent simplicity, that will probably be your response.