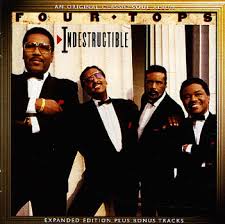 The Four Tops are synonymous with Motown. They did, however, make some excellent music away from the Gordy fold – their stage show mainstay ‘Ain’t No Woman’, for instance, was recorded for ABC/Dunhill while the veteran group’s last two decent hits, ‘Indestructible’ and ‘Loco In Acapulco’ were cut for Arista… and it’s the source album for those last two songs that’s just won reissue via David Nathan’s Soul Music Records outlet.

In truth, the ‘Indestructible’ album isn’t one of the Tops’ best. Like a lot of albums it suffers from having too many different producers. Amongst the cooks spoiling this broth are Steve Barri, Lamont Dozier, Jerry Knight, Albert Hammond, Huey Lewis and Narada Michael Walden all contriving to do something a little “different”. What saves the album and gives it a degree of unity are the magnificent voice of Levi Stubbs and the svelte harmonies of the Tops. Many commentators, me included, consider Stubbs one of the greatest ever soul singers and here he’s in tremendous form particularly on the album highlight – ‘If Ever A Love There Was’ – an electrifying duet with Aretha Franklin… (Kenny G’s in the mix in that one too). ‘Change Of Heart’ is another classic Tops’ moment but too many of the other cuts veer towards pop sensibilities… like the album’s two best-known items. And if you liked ‘Loco’ and ‘Indestructible’ you’ll be delighted to know that this release offers remixes of both as the inevitable “bonus” tracks. Best of the bonuses though is the poignant ‘The Four Of Us’ – only ever released as a B side and as part of an expensive box set – it explains why the Tops stayed “the Tops”. Levi, Obie, Duke and Lawrence were genuine friends and partners and Levi would never entertain his name out front (à la Smokey Robinson or Diana Ross)… and as for going solo, well that was just a non starter. Yep… the Tops were the Tops and even their average material is a cut above most other groups’ best.