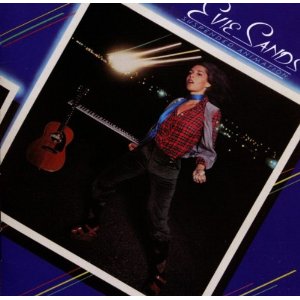 Brooklyn-born Evie Sands was a big star in the States in the late sixties. Working with various teams at the famed Brill Building, she chalked up a number of hits of hits – though, outside America, she meant little simply because her best work was covered by others – here we’re thinking of things like ‘Picture Me Gone’, ‘Angel Of The Morning’, ‘Take Me For a Little While’ and ‘I Can’t Let Go’. In the 70s she continued to record but more and more she focused on writing and production. This album – ‘Suspended Animation’ – was originally released on RCA in 1979 and it perfectly captures where she was and what she was doing at the time.

The ten songs are all Sands originals and, predictably, she takes care of production too – crafting a set that fits neatly into the “blue-eyed” soul genre. The items that have travelled down the years in best shape are the slower songs and of those the opener, ‘Lady Of The Night’ is particularly strong. It’s a well-constructed song with a memorable melody and thoughtful lyrics – the kind that Dusty Springfield performed so well… and surprisingly (or not?) Dusty (who was a great Sands admirer) crops up as one of the backing singers. Also of note are the catchy ‘Take A Little Love’ and the dramatic ‘I Don’t Want To Let Go’.

The faster numbers like ‘I Can’t Wait For You’ and ‘Get Up’ are real period pieces and suffer from an excess of the then fashionable rock guitar sound – courtesy of people like Steve Lukather. Despite that contemporary sound the album did next to nothing (RCA was going through a rationalization in 1979 and this LP was, it seems, lost in the mix) and Evie dipped out of recording for two decades when she eventually teamed up again with her old colleague Chip Taylor in Nashville. Currently she works in an around Los Angeles – performing live and guesting on occasional recordings. I doubt if her live shows features any of the material here – but as a late 70s time piece, some may well want to investigate the set.