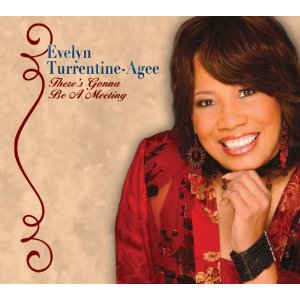 St Louis born Evelyn Turrentine-Agee was raised with real old school gospel music values. Aged 12 she was singing in a gospel quartet formed by her father – The Tylerettes. Relocating to Detroit she worked with the Masonettes, the Gospel Echoettes and eventually the Gospel Warriors. In 1992 Evelyn took the big step of going solo and gradually won the affections of the gospel community through a series of acclaimed albums. She’s also won many awards including 2004’s Stellar Gospel Award For Traditional Female Vocalist.

‘There’s Gonna Be A Meeting’ is the lady’s seventh solo LP and the 12 tracker could well qualify for that category again. Here there are no concessions to gimmickry or the vagaries of musical taste. What we have are old-fashioned songs proclaiming the same message that’s been preached in the store front churches since time immemorial. Equally, each song is delivered with a passion and belief that few modern soul singers (despite the accolades bestowed upon them) could ever hope to achieve. Witness if you would the rolling but gentle ‘God Is On My Side’. Faith – for those who have it – must be a tremendous reassurance and here Ms. Turrentine-Agee sounds so assured and convinced that you might just want to seek out her pastor too. Here, the whole production exudes a wonderful, quiet confidence – as too does ‘Meeting’ – a song with a gospel theme, explored many times over, most notably by Curtis Mayfield.

Other standouts? Well, the gospel hit ‘Work It Out’ (with dubbed on live sounds) is more energetic with a precise call and response backing, ‘Yes, He Can’ has a surging blues undercurrent while the ensemble piece ‘My Job Is Working For Jesus’ is another convincing cut. Modern soulsters who scour gospel releases for little dance gems to add to their collections will be disappointed in that respect here. However, if their ears are turned on they will hear some proper soul music from a singer who understands what commitment is all about.