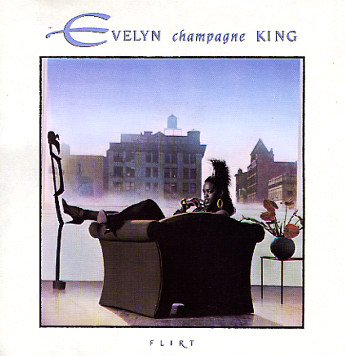 Bronx-born Evelyn “Champagne” King is best known for her disco hits ‘Shame’ and ‘Love Come Down’, that last one still hugely popular at party time. Those hits (and, the records tell us, 18 more) were on RCA – a label that also issued eight full length albums on Ms King. Her last for RCA was ‘A Long Time Coming’ and, prophetically, her next long player was a long-time coming … 1988’s ‘Flirt’. Originally released on EMI-Manhattan, the set’s just won reissue on Caroline International and most soul collectors will be asking “why?”

Though the album yielded three hits – ‘Hold On To What You’ve Got’, Kisses Don’t Lie’ and the title cut – none are that memorable. The up-tempo ‘Hold On’ and ‘Flirt’ are crunchy, electro items and even the more balladic ‘Kisses Don’t Lie’ is dominated by synths and a sterile drum programme. Sure, Evelyn belts the tunes out in fine style (betraying her show biz lineage) but she deserves better songs and a more sympathetic production. Sadly the ‘Flirt’ album hasn’t travelled down time too well, though proper soul fans might want to investigate ‘When Your Heart Says Yes’. With a whiff of Chaka Khan about it, it’s now the set’s standout, though when the album was released it was probably included as filler amongst the prevailing electro disco.

This reissue offers the LP’s full 8 tracks along with 5 “bonuses” – remixes of the hits. Of interest, I’d say, only to died-in-the-wool Evelyn King fans… and how many of them are out there? When even the specially commissioned sleeve notes suggest that the ‘Flirt’ album isn’t the first thing that springs to mind when you think of Evelyn King, then you have to wonder why was it reissued?