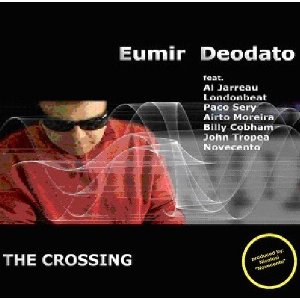 In his home country – Brazil – keyboardist Eumir Deodato is a musical giant. He is, of course,   best known for his massive 1973 global hit ‘Also Sprach Zarathustra’ – a funky fusion version for CTI Records of Richard Strauss’s classical music piece, but he’s also credited with no fewer than 16 platinum records, selling over 25 million albums in the US alone! Aside from that he’s worked with artists of the calibre of Wes Montgomery, Stanley Turrentine, George Benson, Roberta Flack, Aretha Franklin and even Frank Sinatra. Something of a musical coup, then, for UK indie label, Expansion, to secure the European rights to this – the man’s latest solo offering.

For Expansion, ‘The Crossing’ marks something of a departure from the usual modern soul sounds that they regularly champion. The 9 tracker is a much more complex affair than the cool, eminently danceable fare more commonly associated with the label and it’s only after repeated listens that the complexities, subtleties and artistry reveal themselves. Case in point is the album’s opener – ‘Double Face’. It’s busy and bustling and features a vocal from Al Jarreau that ranks amongst his best in recent years. He sings with gusto and is clearly relishing the opportunity to work with Deodato – whose electric piano solo here is superb. It seems the duo bring the best out of each other. Jarreau also guests on ‘I Want You More’. Here he duets with Dora Nicolosi (of the band Novocento) and the result is a lovely, light and infectious Latin shuffler, whose frothiness is enhanced by some sparkling flute from Gianni Verone. Dora takes lead vocal on ‘Rule My World’ – a crisp, little jazzy beater while the other main featured vocalist is Jimmy Helms (supported by his colleagues in London Beat). Helms’s direct, muscular attack on tunes like ‘No Getting Over You’ and the LP’s title cut offer a pleasing counterpoint to the more delicate approach of Jarreau – and indeed Nicolosi.

The album is completed by a trio of instrumentals – which include a big treatment of the standard ‘Summertime’. Here, it’s refreshing to see that the budget stretched to include a real string section – also gainfully employed on the lovely, shuffling ‘Border Line’. The third instrumental is pleasant too – the John Tropea- guested ‘Night Passage’. It’s subtle and gentle and typifies the album’s deceptive depths. There’s nothing here that’s in your face… but as we’ve suggested, repeated listens will reveal their own rewards.