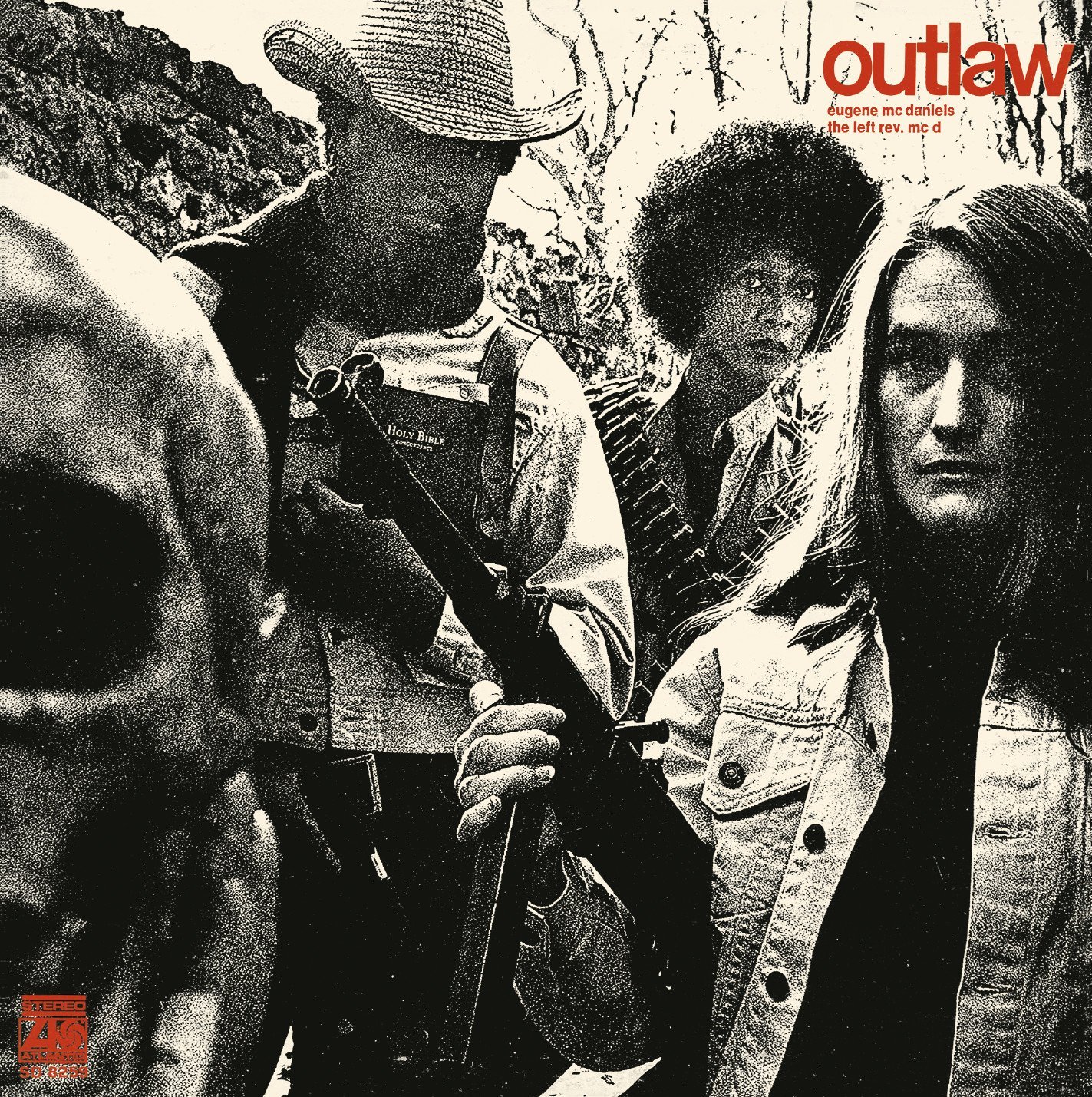 At the start of the 1960s Gene McDaniels was flying high. Smartly-dressed and clean-cut, the smooth crooner from Kansas City scored two Top 10 US pop hits for the Liberty label, ‘A Hundred Pounds Of Clay’ and ‘Tower Of Strength.’ But as the ’60s progressed, McDaniels’ career took a commercial nose-dive as musical tastes changed and in 1970, after several fallow years, he re-launched his career as Eugene McDaniels and signed to Atlantic Records (aided by the fact that his song, ‘Compared To What,’ was a big hit for the label by Les McCann and Eddie Harris).

Those who were familiar with McDaniels’ previous oeuvre would have been shocked by his Atlantic debut, ‘Outlaw,’ released in 1970, which has now been remastered and reissued alongside a clutch of classic soul and jazz titles by Warner Japan (the good news is that they’re available over here at mid-price). The provocative cover of ‘Outlaw’ depicted a hirsute, scruffy McDaniels – who dubbed himself ‘the left rev. mc d’ – holding a revolver and clutching a bible alongside two armed women. The music (produced by Joel Dorn) was even more provocative, though perhaps not as revolutionary as McDaniels had hoped – songs like ‘Welfare City,’ ‘The Silent Majority’ and the ironically-titled ‘Love Letter To America’ are Bob Dylan-esque folk-rock songs with trenchantly polemic lyrics focusing on America’s domestic problems. There’s a jazz-meets-funk tinge to ‘Unspoken Dreams Of Light’ and the excellent ‘Cherrystones,’ a cleverly-wrought jazz-style paean to wilful ignorance. McDaniels’ also serves up his own version of ‘Reverend Lee,’ a song about a preacher beset by carnal temptations that Roberta Flack brilliantly covered on her ‘Chapter Two’ album.

McDaniels’ second Atlantic album, ’71’s ‘Headless Heroes Of The Apocalypse,’ continues lyrically where ‘Outlaw’ left off with its protest themes though the music is darker, jazzier and funkier, thanks to a crack rhythm section comprising pianist Harry Whitaker and future Weather Report duo, bassist Miroslav Vitous and drummer Alphonse Mouzon. On ‘Outlaw,’ McDaniels was trying to be a black Bob Dylan but on ‘Heroes,’ he’s channelling Mick Jagger, who’s the inspiration behind a faintly sinister homage, ‘Jagger The Dagger,’ a song whose off-kilter jazzy groove has been sampled by a Tribe Called Quest and numerous other hip-hop acts.  The funkafied title track is a conspiracy theory song that focuses on conflict in the Middle East, while the epic ‘The Parasite’ finds McDaniels’ commenting on the genocide of Native Americans. Arguably the album’s best cut is the jazz-inflected ‘Freedom Death Dance’ (which references Eddie Harris’s jazz classic, ‘Freedom Jazz Dance’). It laments the futility of good human endeavours in an unjust world. Sounds heavy? Well, lyrically, it is but the album’s more sober themes are often leavened with a wry sense of humour, as evidenced by the absurd and hilarious narrative ‘Supermarket Blues.’

Sadly, not many people saw the humour and satire behind some of McDaniels’ lyrics, which came to the attention of President Richard Nixon’s regime and resulted in a complaining phone call by then US vice-president Spiro Agnew to Atlantic Records’ boss, Ahmet Ertegun. The fallout from that call was that McDaniels was unceremoniously dumped from the label (though he went on to become a hit-making producer and songwriter for Roberta Flack, Gladys Knight and Phyllis Hyman). The album sank into obscurity until segments of it were sampled by hip-hop acts in the late ’80s, which eventually brought about its reissue in the early noughties. Now deemed a cult classic, ‘Headless Heroes Of The Apocalypse’ is back in circulation again. Remastered, it sounds better than ever, though sadly these Japanese reissues don’t possess liner notes, although McDaniels’ lyrics are present and are well-worth reading. Much of what he wrote remains relevant to today’s troubled world. The late producer Joel Dorn said of McDaniels: ‘He’s a genius.’ McDaniels, himself, was more modest. “I’m just a half-assed poet,’ he declared to this writer in 2002.