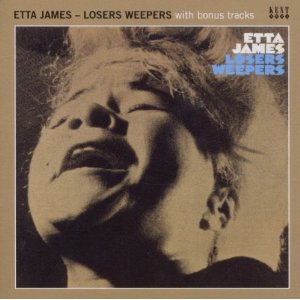 The redoubtable Etta James has, it seems, recorded her last album… but what a highpoint to end on. Considering the lady’s health, ‘Dreamer’ is a remarkable tour de force. Essentially a set of covers of old blues and soul songs, it harks right back to her golden days at Chess and by coincidence – to make that connection even easier – Ace/Kent have recently reissued two of her lesser known Chess LPs. Last month they offered ‘Call My Name’ (check out the review in our archive) and this month ‘Losers Weepers’ hits the racks.

The album was originally released in 1970 and though Ms James was at that time in a career doldrum (brought on by falling sales and personal issues) the music on the 11 track LP is remarkably consistent. Ralph Bass was at the helm and he knew what Etta did best… make what at the time was dubbed “heavy soul”. Throughout the set the sound is intense and focused and even on well-known songs like ‘For All We Know’ and ‘I Got It Bad And That Ain’t Good’, the accepted template is thrown away in favour of the tortured “Etta James way”. Even on the apparent lighter moments (like the lilting Jackie Edwards’ song ‘Look At The Rain’) there are all kinds of hidden depths.

As with the release of ‘Call My Name’, Kent augment the original album with generous bonuses. Here there are a mighty 11 “extras” – tracks recorded at around the same time as ‘Losers Weepers’ was being created. As with the album, there’s a mix of original material and covers … amongst them stirring versions of Theola Kilgore’s ‘The Love Of My Man’ and the Falcons’ ‘I Found A Love’. Interestingly she also tackles a Bee Gees’ song – ‘The Sound Of Love’ and you’d hardly know it began life as a bland pop ballad from an equally bland pop group. “Heavy soul” indeed! Etta works the same magic on the Association’s twee ballad ‘Never My Love’…but then Etta James fans would expect that wouldn’t they? For those fans, it’s a sad time (given the state of their heroine’s health) yet they have the music … and great reissues like this…. to keep her name alive for many years to come.