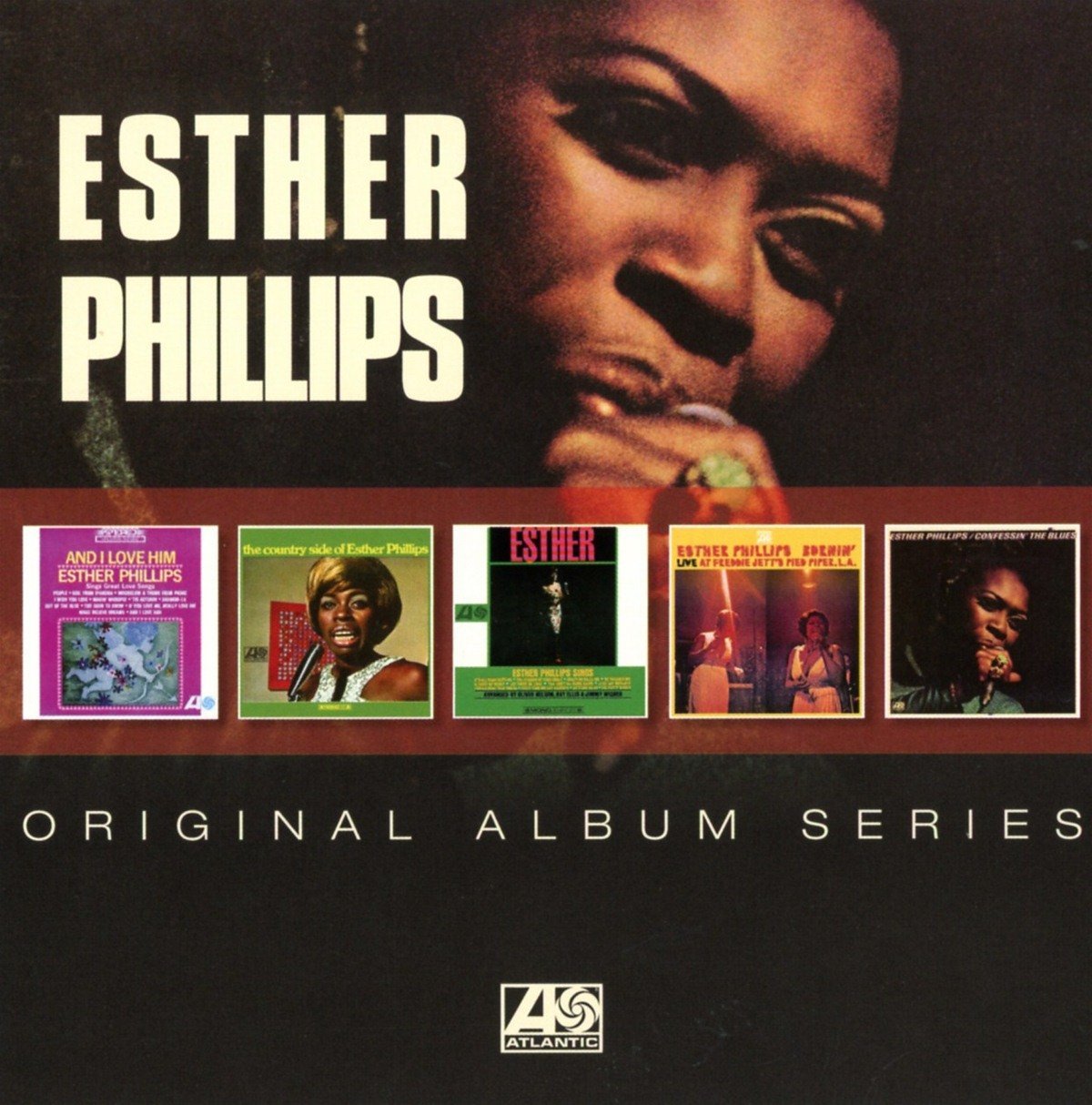 Esther Phillips’ six-year tenure at Atlantic Records in the 1960s has often been a overlooked phase in the Texas singer’s career, playing second fiddle to the chanteuse’s incredibly successful and fertile spell at CTI’s Kudu imprint in the ’70s. While no one in their right mind would question the potency of her Kudu oeuvre and say that it’s inferior to what she did at Atlantic – it patently isn’t – what she recorded for Ahmet Ertegun’s company between 1965 and 1970 shouldn’t be dismissed as inconsequential or of little value. For those ignorant of Esther’s Atlantic work, this commendable packet of five from Rhino (with each album attired in a mini-replica LP sleeve) is a handy and affordable reminder of her achievements.

After scoring a string of charting R&B hits in the early ’50s as ‘Little Esther,’ the teenage gal from Galveston fell into drug addiction. At the Lenox indie label in the early ’60s, however, Esther revived her ailing career and reinvented herself as a grown-up singer, scoring a US R&B chart topper with her rendition of the country tune, ‘Release Me’ (later a UK hit for UK ‘easy’ crooner, Engelbert Humperdinck). Following this, she was snapped up by Atlantic and her first long player for the label, ‘And I Love Him,’ kicks off this compendium. The title track is Esther’s distaff spin on Lennon & McCartney’s immortal tune from The Beatles’ ‘A Hard Day’s Night’ album (the Fab Four were big fans of hers, incidentally), and was a US R&B hit. For those expecting the blue funk and gritty soul of her Kudu period, this album’s easy listening proclivities (the material includes movie songs, jazz standards and bossa novas) might disappoint though Esther’s vocals – sharp as a razor and bitter as a lemon and suffused with great soulfulness – are exceptional, giving limp lounge arrangements with schmaltzy strings a piquant twist (imagine garnishing a plate of blancmange with a Scotch Bonnet chilli and you’ll get an idea of how Esther’s fiery vocals seem at odds with the pallid arrangements).

1966 saw two Esther LPs on Atlantic – ‘The Country Side Of Esther,’ which included a new version of ‘Release Me’ and some great twists on Nashville/C&W repertoire, and ‘Esther Phillips Sings.’ The latter featured arrangements by Oliver Nelson among others and is much more jazz-oriented  than her previous Atlantic releases, containing big band versions of ‘It’s All Right With Me,’ ‘Let There Be Love,’ and ‘A Taste Of Honey,’ plus a boss nova-flavoured ‘The Shadow Of Your Smile,’ and some expressive ballads.

As versatile as she was, Esther Phillips’ real forte was singing the blues and on her next album, ‘Burnin’,’  a combustible live set recorded in Los Angeles and released in 1970, she showed her true mettle. Backed by a band led by King Curtis, with Richard Tee on keys and Chuck Rainey on bass, she’s in irresistible form – sassy, sexy, and supremely soulful, especially on sensual readings of her hits ‘And I Love Him’ and ‘Release Me.’

Esther’s fifth and final Atlantic LP, ‘Confessin’ The Blues,’ also released in 1970, contains outtakes from the ‘Burnin” album – which appeared on side two of ‘Confessin” – and some studio sides where the singer is backed by a big band with charts by Onzy Matthews. She’s in her element here and sounds more comfortable with this material (which includes the blues songs ‘I Wonder,’ C.C. Rider,’ and ‘Cherry Red’) than on some of her earlier Atlantic albums.

Though Esther Phillips’ Atlantic recordings aren’t as satisfying or consistent as her CTI offerings of the ’70s there’s nevertheless a lot to appreciate here – and anyone who shows just a glimmer of interest in the life and work of the singer born Esther Mae Jones will find this set illuminating.