ESTHER PHILLIPS: ‘From A Whisper To A Scream’ (Soul Music Records) 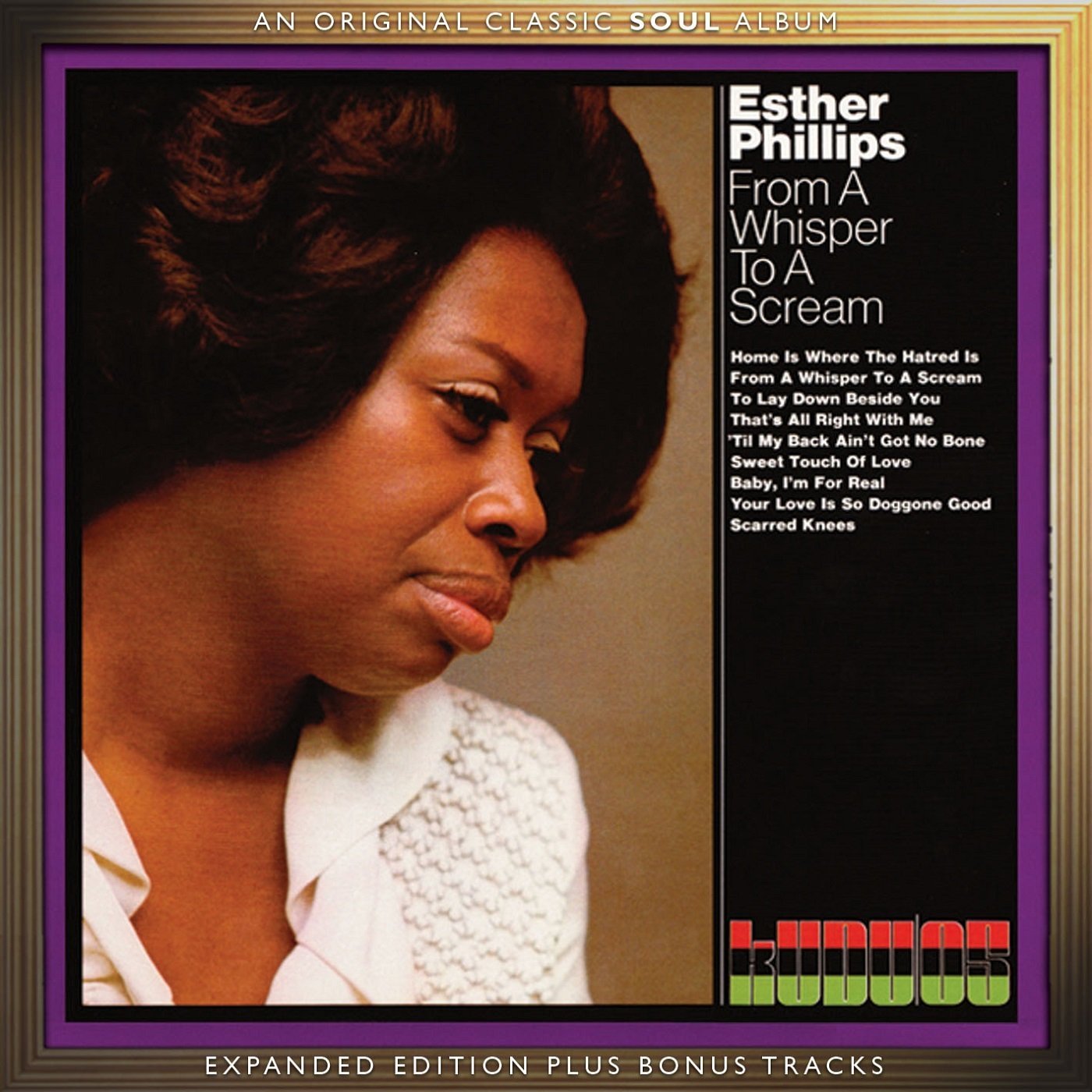 Esther Phillips scored her biggest hits when she was a teenage R&B sensation known as ‘Little Esther’ in the early 1950s but in truth she didn’t make her most meaningful and personal music until she was much older. A stint at Atlantic in the 1960s yielded an R&B chart-topper (Phillips’ uniquely plaintive interpretation of the country song, ‘Release Me,’ which Engelbert Humperdinck later purloined) but it wasn’t until the Galveston singer arrived at Creed Taylor’s C.T.I. label in 1971 that she hit her richest vein of form. C.T.I. was ostensibly established as a jazz label but Taylor set up a subsidiary imprint called Kudu to cater for more R&B-tinged music and signed Phillips to it along with saxophonists Hank Crawford and Grover Washington Jr. Phillips, who’d had her fair share of travails by then (she had been a drug addict for many years) was only 36 at the time but her distinctive voice was shaded by sorrow and a heavy-hearted, world-weary tinge. It’s that quality that invests her work with such a haunting poignancy and powerful emotional honesty – and it can be found in abundance on her Kudu debut, ‘From A Whisper To A Scream,’  which is now reissued with four bonus tracks by Soul Music Records.

Deemed a soul-jazz-blues classic, ‘From A Whisper To A Scream,’ is considered by many (this writer included) to represent Esther Phillips’ most satisfying and cohesive work. With Creed Taylor at the helm plus arrangements by Don Sebesky and Pee Wee Ellis as well as featuring the cream of the early ’70s New York session mafia (Eric Gale, Cornell Dupree, Gordon Edwards, Bernard Purdie, Richard Tee et al), the album kicks off with Phillips’ inimitable take on Gil Scott-Heron’s junkie confessional, ‘Home Is Where The Hatred Is.’ David Nathan’s insightful liner notes reveal that the singer was initially reluctant to perform the tune because it reflected her own battle with drug addiction and she felt that “singing the song was just like being interviewed in public.” Luckily for us, Phillips acquiesced and delivered what is arguably the definitive performance of her career. It’s harrowing to listen to but vivid and compelling.  The rest of the album is just as strong and standouts include a soulful reconfiguration of Allen Toussaint’s ‘From A Whisper To A Scream,’ the piquant blues-funk of ”Til My Back Ain’t Got No Bone,’ and great version of Marvin Gaye’s ‘Baby, I’m For Real,’ which was a hit for Motown group, The Originals, in 1969.

Appended to the original album is a quartet of bonus cuts that were outtakes from the original sessions. ‘How Blue Can You Get’ is a slow, sensual blues while the jaunty Carole King-penned ‘Brother, Brother’ is sweetly soulful. Phillips’ consummate expertise as a ballad singer is spotlighted on the slow, mournful ‘Don’t Run To Him’ and the dreamy ‘A Beautiful Friendship.’

They cap off what is a CD of extraordinary performances from one of the most unique voices in soul and jazz.