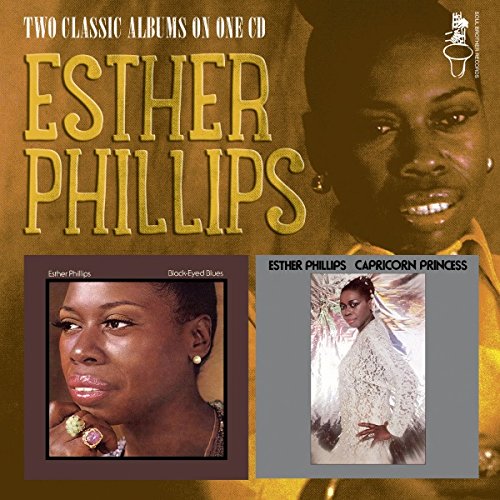 Galveston gal, Esther Phillips, was a teenage R&B sensation in the 1950s (when she went under the name ‘Little Esther’) but reinvented herself as a raspy-voiced blues/jazz song stylist in the ’70s when she joined producer Creed Taylor’s Kudu imprint in 1971. The UK’s Soul Brother label issued a fine overview of Esther’s ’70s and ’80s years in 2003(titled ‘Anthology,’ which is still in print) and have now reissued as a ‘twofer’ the singer’s third and seventh albums for Kudu, ‘Black-Eyed Blues’ and ‘Capricorn Princess.’

The former album was first issued in 1973 and opens with a sassy take on Bill Withers’ ‘Justified’ with slick horn charts by Pee Wee Ellis and string arrangements from Bob James. The supporting cast includes jazz stars Ron Carter and Pepper Adams, who bring an element of class and sophistication to the proceedings. The title track is another highlight, Esther’s stunning take on a tune that Joe Cocker co-wrote, which rides on a slow-burning funk groove. There are some fine ballads, too, including a passionate rendering of the Carolyn Franklin-composed ‘Too Many Roads,’ and a sweetly soulful take on Duke Ellington’s ‘I Got It bad And That Ain’t Good.’ A non-album bonus track from the same sessions, ‘Tangle In Your Lifeline,’ is included.

Come 1976 – when the underrated ‘Capricorn Princess’ was released – Esther Phillips had morphed into a disco queen with her mirrorball retooling of the Dorsey Brothers’ ’30s tune, ‘What A Diff’rence A Day Makes,’ which was a US pop and R&B hit in ’75. Understandably, perhaps, the album finds Esther mining a disco groove, especially on the pumping, clavinet-driven ‘Boy, I Really Tied One On’ – a Janis Ian song – ‘Magic’s In The Air’ and a turbo-charged version of Johnny Mercer’s ‘Dream.’ Etta James’ ‘All The Way Down’ is given an atmospheric funk makeover but it’s on the ballads (‘I Haven’t Got Anything Better To Do’ and ‘Candy’) where Esther really excels, her tart delivery injecting a real poignancy to the lyrics. Though Esther Phillips’ nasal delivery isn’t to everyone’s taste she was a supremely soulful singer and these two albums, remastered and issued on CD together for the first time, contain some of her finest performances.