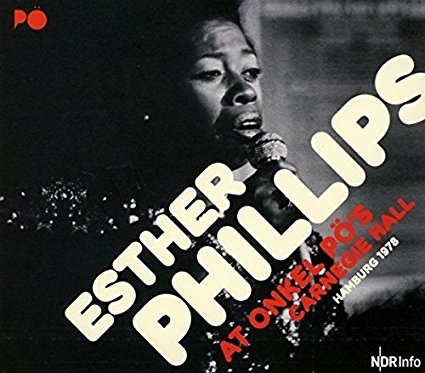 Esther Phillips was a unique talent but, sadly, her life was a roller coaster of ups and downs. She found fame early – as “Little” Esther Phillips, but the grind of touring the chittlin’ circuit in the 50s and early 60s took a toll. Addicted to heroin and linked with many of the music biz’s less savoury characters, her burgeoning career nose-dived. Country singer Kenny Rogers, of all people, helped her make a comeback when he persuaded his brother Lelan to sign her to his Lennox Record label. Hits and acclaim followed; then a major deal with Atlantic Records… but again drug ravages hit hard.

In the early 70s Ms Philips enjoyed a second renaissance with Kudu Records; then a stint with Mercury. But her lifestyle came with a price and in 1984 she died aged just 48. Long-term drug abuse had caused major organ failure and despite the fame she’d enjoyed Esther Phillips was buried in a pauper’s grave… a sad and wasteful end.

Esther Phillips, though, left a sparkling, soulful – if at times – harrowing music legacy and most of her material is fairly easily accessible to collectors. Now that legacy is enhanced with the release of 2 CD live album that was recorded at Hamburg’s famous Onkel Pö’s Carnegie Hall club in 1978. In terms of chronology, the singer was in her Mercury period, so the big hits were well established and those songs form the bulk of the concert’s material. The show begins with her version of Eddie Floyd’s ‘I’ve Never Found A Man (Woman)’ and also included are treatments of songs like ‘Native New Yorker’ (an epic 12 minute plus version dedicated to the band – all New Yorkers), ‘One Night Affair’, ‘Stormy Weather’, ‘Cherry Red’ and ‘What A Difference A Day Makes’ That tune, her biggest, hit ends the show and is another extended 12 minute workout, allowing the aforementioned band – Henry Cain (piano), Wes Blackman (guitar), Bill Upchurch (bass) and James Levi (drums) – to stretch out.

There was no place in the set for ‘Home Is Where The Hatred Is’ but there’s darkness with an 18 minute, self-penned song simply called ‘The Blues’. Sung and spoken, in many ways it can be seen as an epitaph for the talent that was Esther Phillips.