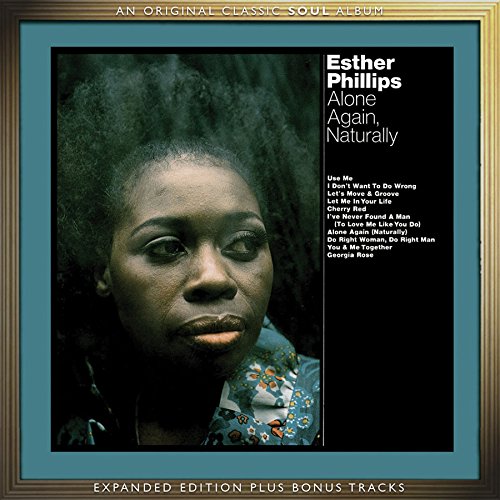 Esther Phillips never had the most aesthetically pleasing or ear-ravishing of voices – her sound, unique as it was, was unorthodox to say the least: raspy, tart, adenoidal and, perhaps worst of all, it possessed a quivering vibrato that on occasion resembled a bleating lamb on the way to the slaughter house. And yet for all those apparent deficiencies, there remained something ineffably beautiful about Phillips’ delivery – but that beauty, as with Billie Holiday and Nina Simone, came from the emotion she injected into her performances and which shaped her phrasing and dictated her timing. Like Holiday – with whom she shared several career parallels – Esther Phillips was a slave to drugs and alcohol, two demons that inevitably hastened her demise at the age of 48 in 1984. And like ‘Lady Day,’ the pain and suffering of Phillips’ life experiences could be felt in the emotional nakedness of her performances. Her career, which began when she was a teenaged star called Little Esther in the 1950s, was characterised by many ups and down. In 1972, when she recorded ‘Alone Again, Naturally,’ Phillips’ career was in the ascendant again. The 1960s had witnessed a long stint at Atlantic, which had resulted in a handful of US R&B hits but also had its fair share of disappointments. In 1971, Phillips signed with producer Creed Taylor at his CTI label, joining the roster of his Kudu imprint. Phillips’ debut for Kudu was an R&B tour de force called ‘From A Whisper To A Scream.’ It garnered the Texas singer a Grammy nomination – but sadly, Phillips lost out to Aretha Franklin, though the latter famously handed her award to Phillips in a rare show of appreciation for a rival singer. In 1972, Phillips went into the studio with Taylor at the helm and cut ‘Alone Again, Naturally,’ an album that also picked up a Grammy nomination and which is considered by many critics and fans as the chanteuse’s best long player. Given its elevated status in the Phillips’ canon, it’s tantamount to a crime that the album was only briefly available on CD via the now defunct Reel Music label in 2008. But thanks to Soul Music Records in alliance with Real Gone – who’ve brought out some great vintage soul reissues recently – the waiting is over and ‘Alone Again, Naturally’ with its lucid, remastered sound is back in the racks.

It opens with a terrific version of Bill Withers’ ‘Use Me’ packed with some thrilling call-and-response vocals – the song’s tight, funky groove highlights the expertise of the contributing musicians, who include Ron Carter, Gordon Edwards, George Benson, Eric Gale, Cornell Dupree, Richard Tee, Maceo Parker, Ralph MacDonald, Billy Cobham, Bernard Purdie and Hank Crawford. The arrangements are by former James Brown MD, Alfred ‘Pee Wee’ Ellis, with string charts supplied by CTI’s dependable in-house arranger, Don Sebesky. Phillips also pumps new blood into another Withers’ number, the ballad ‘Let Me In Your Life,’ puts a fresh spin on Aretha’s ‘Do Right Woman, Do Right Man’ and transforms Irish pop singer Gilbert O’Sullivan’s title song with a spicy R&B marinade. Another highlight is the shimmering ballad, ‘You & Me Together.’ The singer’s blues roots are evident on her take of Joe Turner’s ‘Cherry Red’ and the set concludes with the lovely jazz-infused paean to African-American women, ‘Georgia Rose’ – as recently recorded by Queen Latifah – which features an opening monologue penned by Gil Scott-Heron. 42 years on from its original release, ‘Alone Again, Naturally’ still stands up to the scrutiny of repeated listening – it’s a superlative and timeless collection of songs from one of soul music’s finest exponents (this reissue also boasts two bonus cuts, live versions of ‘Cherry Red’ and Billie Holiday’s ‘God Bless The Child’).  As well as the great music, you’ll discover informative liner notes by A. Scott Galloway that should enhance your appreciation of Esther Phillips’ genius.