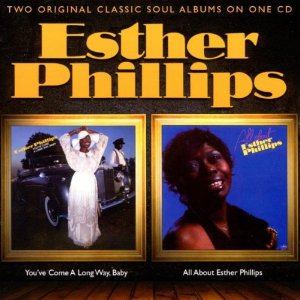 Esther Phillips is best known for her wonderful reworking of ‘What A Difference A Day Made’. Sadly those who only have that fleeting acquaintance with the lady are blissfully unaware that her career goes back a long, long way before that ’75 chart rider.

Esther Phillips (born Esther Mae Jones in Galveston in 1935) began her career in the ’50s and by the mid ’60’s she’d become something of a cult artist (a favourite of the Beatles, no less). A serious addiction problem meant her career stalled till she was signed to Creed Taylor’s Kudu label in 1971. There she cut some harrowing albums, particularly ‘From A Whisper To A Scream’ which featured the cathartic ‘Home Is Where The Hatred Is’. In an “up” moment at Kudu she transformed Dinah Washington’s ‘What A Difference A Day Made’ into a classy disco dancer and her career took on a much higher profile. On the back of the new found notoriety she signed to Mercury Records where she was promised greater artistic control and the albums that make up this “twofer” are the first two LPs which that deal yielded.

The title of ’77’s ‘You’ve Come A Long Way Baby’ reflects the optimism that surrounded Esther after her big hit and the material she chose (with producer Pee Wee Ellis) was a clear attempt to keep the momentum. In an effort to revisit ‘What A Difference…’, the pair tackle the Rodgers and Hammerstein standard ‘If I Loved You’ in much the same way but it doesn’t quite work. A similarly styled version of the Platters’ ‘My Prayer’ is marginally better, but it’s the slower cuts that have travelled time better. Her version of Van Morrison’s ‘Into The Mystic’, for instance, is a great example of the lady’s idiosyncratic art.

For ’78’s ‘All About Esther Phillips’ she chose ex-Crusader Wayne Henderson as producer. Standout here is a delightful version of ‘Native New Yorker’ while there’s a superb medley of the Side Effect’s ‘There You Go Again’ and the standard ‘Stormy Weather’. Those, and cuts like ‘Ms’ and ‘If I fall In Love By Morning’ make this album a much more coherent effort.

Esther Phillips recorded two more LPs for Mercury; then, sadly her health started to fail (a result of a career-long drug/alcohol problem). She recorded sporadically before succumbing to liver and kidney failure in Los Angeles in 1984. These two albums (though by no means her best) are a fitting tribute – and the more so thanks to some personal insights in the notes courtesy of soulmusic.com’s boss, David Nathan.