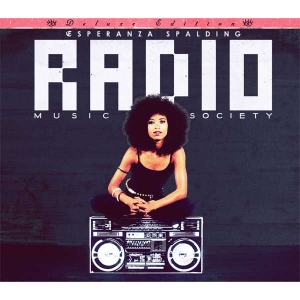 One of the rising young stars in the jazz firmament is undoubtedly the prodigiously talented 27-year old bass player, Esperanza Spalding. The Afro-topped Oregon native returns to the fray in impressive style with this, her fourth album, ‘Radio Music Society.’ Her last opus, ‘Chamber Music Society,’ was an impressive outing – she also garnered a Grammy award last year on the back of that album in the Best New Artist category – but this new recording venture is something else. While ‘Chamber Music Society’ was an intimate affair that was slightly dark and occasionally esoteric at times, the new record is considerably brighter sonically and much more outgoing and accessible as a result – in fact, it’s downright funky, sassy, and soulful and reveals another dimension of Spalding’s huge talent, which now extends to singing and songwriting as well as her customary bass work.

The opening title track is an infectious number, with Spalding providing sinewy electric bass lines over which she provides some delightful vocals. Indeed, there’s something magical about Spalding’s voice – it’s light, delicate and yet incredibly supple and expressive and at various places throughout the album there are palpable shades of Minnie Riperton in her delivery. Spalding also demonstrates on this album how she’s become adept at creating memorable melodies and lyrics, as exemplified by the gorgeous ‘Cinnamon Tree.’

Spalding has been categorised as a jazz artist with a Latin twist but on this album, she digs deep into soul and acid jazz/jazz-funk territory. A case in point is the catchy ‘Black Gold,’ which rides on a slinky bass groove and features jazzy horns and a few sanctified Hammond B3 licks that punctuate Spalding’s soulful vocal. ‘Crowned & Kissed’ – which references King Arthur and Midas in its unusual lyrics – is another highlight, as is a tremendous revamp of the Stevie Wonder-penned ‘I Can’t Help It,’ which is propelled by a fluid Latin-inflected groove with a funky undertow. There’s a lot going on the background of that track – ethereal backing vocals and slivers of saxophone – but they don’t distract from Spalding’s performance: rather they enhance it.

The brassy ‘Hold On Me’ is more overtly jazz-infused, a sultry after-hours ballad flecked with blues licks that periodically builds to a climax and then eventually morphs into a mellow meditation on love and life. The excellent, propulsive ‘Endangered Species’ exudes a jazz-fusion feel – it is, in fact, a Wayne Shorter composition that Spalding has provided lyrics for and it works terrifically well.

There’s no doubt that this 12-track set is Esperanza Spalding’s most impressive work yet. Its sound is original and highly sophisticated – in terms of its lyrics, melodies, chord changes, song structures and arrangements – but also incredibly accessible too and certainly radio-friendly. It achieves the perfect balance: it’s able to stimulate the intellect, but also satisfy the heart and soul – crucially, it also finds common ground between the opposing forces of commerce and artistic expression. What more could you ask for in an album? Sensational (it’s out in March).