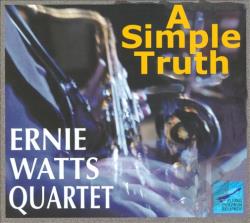 Virginia’s Ernie Watts is the sax player’s sax man. The double Grammy winner cut his pro musical teeth touring with Buddy Rich and through the 70s he was the go-to sax session player – soul fans will know and love his work with Marvin Gaye while movie buffs will know him for his contribution to the ‘Grease’ soundtrack!

In the late 80s Watts returned to “straight” jazz and won acclaim working with Charlie Haden in Quartet West. For the past fifteen years he’s led his own quartet – pianist Christof Saenger, bassist Rudi Engel, and drummer Heinrich Koebberling – and via his own Flying Dolphin label, his recordings have won him a devout and loyal fan base who will warm instantly to this latest project – an eight track concept album that isn’t quite what the title implies.

In the accompanying notes Watts declares that the music on the album is “related to his understanding of music as one of the prime human basics that connects people, going right past language, background, ethnicity, culture, and even history, info direct feeling”. After listening to his music (live or in concert) Watts wants his audiences to have experienced something “beautiful” He adds that this sounds “simple (as in the LP title), although perhaps not easy”. Watts, you see, believes the musicians are there to be challenged and, ergo, what they create can be deemed challenging.

The challenge for the Quartet on ‘A Simple Truth’ was to craft an album that reflects the “reality that every day is always shaped by our thoughts, our words and our belief systems” and to that end they take us through a 24 hour cycle. The set begins with the lush and meditative ‘The Sound; Morning’ and ends with ‘The Sound; Evening’; in between the music builds to a be-bop climax with the cover of Dizzy Gillespie’s plainly titled ‘Be-Bop’. That one’s an album stand out – as is the other big cover, a treatment of Keith Jarrett’s ‘No Lonely Nights’. Here Watts’ signature warm tones are perfectly supported by his three sidemen. Clearly after 15 years together, the chemistry is stronger than ever and, indeed, that integrity is plain throughout ‘A Simple Truth’ – Watts’ “easy/difficult” album.