ERIC CLAPTON: The Lady in the Balcony (Mercury) 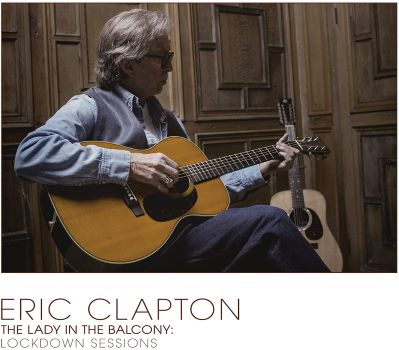 Eric Clapton’s annual residency at the Albert Hall was a much-loved (and always sold out) mainstay of the UK music “season”.  The pandemic, of course, put paid to the May 2021 shows but old Slowhand was determined to deliver something. With a stellar band and crew at the ready, he hit on an innovative idea. He reconvened with the whole team to the English countryside and staged a concert in the presence of only the participants themselves  and , of course, Mrs C! The whole thing was recorded and filmed and this, the subsequent album, has just been released.

The actual venue was Cowdray House down in deep, darkest Sussex. Eric’s wife, Melia, was the only “non-combatant” involved and indeed she’s the “lady” is the enigmatic title. It seems she watched most of the proceedings from the grand hall’s balcony! There’s nothing enigmatic about the repertoire, however. The 17 tracker features a selection of  fairly obvious songs from Clapton’s storied past – EC originals and covers of blues standards. Maybe the least well-known song is Clapton’s own ‘Bad Boy which featured on his very first, 1970, solo album. Sort of unexpected too are the homages to his old 60s sparring partner Peter Green. EC offers covers of Green’s ‘Black Magic Woman’ and ‘Man Of The World’  You can sense the heartfelt nature of these tributes to the man who could have been the greatest UK blues player had fame and fate not dealt him such a wretched hand!

The remaining tracks on the album are fairly predictable and in many ways, ‘The Lady in the Balcony’ can be seen as a sequel to Clapton’s famed 1992 ‘Unplugged’ album. The titles share four songs, including, naturally ‘Layla’. 30 odd years down the road though, expect different treatments – maybe most obvious on ‘Layla’ with, here, an extended intro.

It’s the blues covers, though, that stand out – notably the takes on ‘Rock Me Baby’ (soul fans will remember this from Otis Redding’s ‘Otis Blue’ LP) and the menacing ‘Got My Mojo Working’ – one of three tracks on which the guitarist “goes electric”. With rousing vocal support , this closing track takes our man right back to his Mayall days.

That vocal support by the way comes via bassist Nathan East. The other players are drummer Steve Gadd and keyboardist Chris Stainton whose barrel house blues style is a standout on a number of tracks.

‘The Lady In The Balcony’ is Clapton’s response  to the lockdown – something he has been a vocal critic off . Indeed he combined with Van Morrison to record some anti lockdown music. I’ve noted too that he’s been critical of the vaccine  – even suggesting that the jab accelerated the arthritis in his hands! Come on, Eric you’re 76 and arthritis is an occupational hazard for guitarists!

Don’t let the bad publicity over his lockdown and vax stances colour your opinion of the music though! Eric Clapton’s still at the top of his game (arthritis permitting!) and  this album is the proof!