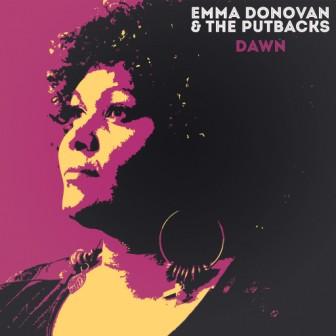 Emma Donovan and her 5 piece Putbacks are the latest organic soul combo to break out of Australia. Like the classic American soul divas, Emma had her first musical experiences in Church then she moved on to join the family band – imaginatively called The Donovans. That band played country but her father was a blues and soul man at heart and the music on this album combines elements of all three genres – in much the same way as authentic Southern soul does. The fact that ‘Dawn’ was recorded live, in one room on an old eight track analogue recorder extends that link.

Standout track amongst the 9 is the LP’s title cut. ‘Dawn’ is an atmospheric, crisp mid-tempo item with a catchy guitar fill running through it. Biggest attraction though is Emma’s achingly soulful vocal – just right for the song’s sentiments. ‘Keep Me In Your Reach’ is another album goodie. Hammond-led, it’s rough and rustic in the same way as classics from studios in Shreveport, Muscle Shoals and all stations south and I’m sure the run-out vamp is pinched from the Mar-Keys’ ‘Philly Dog’.

Emma can also do raw funk. The opener, ‘Black Woman’ is feisty and tough and features some searing Ernie Isley style guitar. The fast and furious ‘Daddy’ takes its inspiration from prime time Norman Whitfield. It’s a lyrical riposte to the preceding track, ‘Mother’ – a dramatic ballad. There’s more decent balladry on the sombre ‘Come Back To Me’ which features some sweet country style harmonies. Elsewhere ‘My Goodness’ is a catchy item and ‘Voodoo’ is a choppy funk item – as you’d except from the title.

Find out more about the intriguing Emma Donovan and the Putbacks @ www.hopestreetrecordings.com