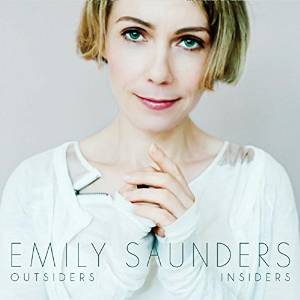 UK jazz vocalist Emily Saunders debuted in 2011 with ‘Cotton Skies’ – her homage to the grooves, melodies and rhythms of Brazil. The long player showcased her ability to use her voice rhythmically in the manner of say, Flora Purim or Nina Simone. ‘Outsiders Insiders’ is her follow up and on it she extends what she aspired to on that debut via a set of nine originals enhanced by a soundscape that is a tad more electric and, in places, a little more experimental .

The set opens with the lightly Latin-flavoured ‘Residing’, a tune that conjures up lazy summers and seasonal sambas in the way the best of Astrud Gilberto did. More of the same on the obviously named ‘Summer Days’, a cut with mainly wordless vocals and some intriguing trumpet from Byron Walden.

The album’s real highlights though are the ballads… the almost whispered but totally engaging ‘Moon’ and the more plaintive ‘You And Me’ which features lovely keyboard work courtesy of Bruno Heinen. Both have the quality of tone poems and indeed we’re told that much of Ms Saunders’ work starts out in that format.

Emily will be promoting the album with two shows… the first at the Bristol Jazz and Blues Festival on March 5th and the second at London’s St James Studio on March 17th. You can find out more @ www.emilysaunders.co.uk .