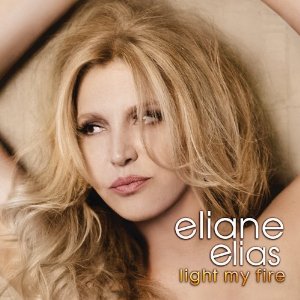 After her last studio album, the exquisitely-orchestrated Blue Note offering ‘Bossa Nova Stories’ from 2008, the blonde bombshell of Brazilian jazz is back with her debut project for her new label, Concord. And what a debut it proves to be. In contrast to the beguiling artifice and big production values of ‘Bossa Nova Stories’ this is more of a spontaneous and minimalist affair with Elias backed by her trusty trio comprising guitarist Oscar Castro-Neves, bassist (and husband) Marc Johnson and drummer Paulo Braga.

The group’s sound is enhanced in places by additional percussion, an extra drummer and a couple more guitar players, but it never loses its sense of lightness and limpid, uncluttered spaciousness. The liquid beauty of Elias’s piano playing is complemented by her whispery, seductive vocals, which ooze a languorous sensuality. The title track, of course, is The Doors’ classic pysch-rock tune, which Elias skilfully translates into a smouldering bossa nova groove. She also offers a fresh and striking interpretation of soul singer Stevie Wonder’s infectious ’60s smash, ‘My Cherie Amour.’ Perhaps even more ear-catching is her adventurous deconstruction of the Paul Desmond-penned Dave Brubeck Quartet hit, ‘Take Five,’ which is rendered as a dreamy, mid-tempo vocalese track with horn man Randy Brecker supplying some tasteful slivers of muted Miles Davis-esque trumpet. The combined effect of all these elements is sonically ravishing, and heightened by a newly-composed mid-section from Elias, who opens up the tune into a mesmeric modal groove.

This is an album big on style and atmosphere – thanks to the lush, romantic aura that Elias and her musicians create – but also possesses much substance too. The inclusion of legendary Brazilian singer/songwriter Gilberto Gil on several tracks is inspired, his distinctive voice blending beautifully with Elias’s – especially on his tune ‘Aquele Abraco’ and ‘Turn To Me.’ The latter duet was co-written by Elias, who also demonstrates her growing prowess as a composer with the delightful ‘What About The Heart (Bate Bate),’ a gorgeous blend of piano jazz and sultry Brazilian rhythms. A tremendous album, this, and undoubtedly one of the Sao Paulo singer/pianist’s best offerings yet.