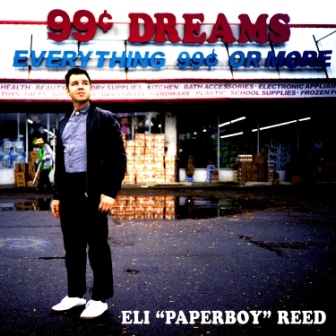 Boston blue-eyed soul man Eli ‘Paperboy’ Reed (the “paperboy” bit refers to a nickname he had as a child for wearing a US paperboy’s hat) has been on the scene for a few years now and despite plenty of acclaim and lashings of fine music, he’s not quite made it to the premier league. He almost got there in 2010 with his long player ‘Come And Get It’. The set won great reviews in the heavyweight press and was actually “album of the week” on dear old BBC Radio 2. Sadly it didn’t quite get over the line, despite backing from the parent label, the mighty Capitol. Reed’s next album was also on a major label – Warner Bros but again despite lots of praise, it just didn’t cross over. Undeterred the singer continued to make the soul music he loved and was welcomed by the indie company Yep Roc who were glad to help him deliver his special sounds to his devoted coterie of fans – people who know and care about soul music and know and care about Eli Reed.

And its Yep Roc that’s home to Reed’s newest set – the 12 tracker that is ’99 Cent Dreams’. If you know the Paperboy’s work, you’ll know what to expect – raw, gritty, old school, honest soul. If you’re not familiar with his work, well that just about sums it up… massively obvious from the first bars of the first track – the jaunty ‘News You Can Use’. The soul quotient is still high on track 2, the Sam Cooke-flavoured ‘Said She Would’. The Cooke connection comes via the song’s gentle melody and honest feel rather than the vocal. Where Cooke’s vocal was honeyed and supple, Reed’s is raw and edgy. Hear that raw and rough edge at its roughest and rawest on ‘Tryin’ – the vocal is a hybrid of the great chest-beating Southern soul men and the Godfather of Soul.

Amongst other album highlights are ‘Coulda Had This’ (complete with a ‘People Get Ready’ intro), the slow bluesy grind of ‘In The End’ and the moody album closer ‘Couldn’t Find a Way’. On those (and indeed throughout the album) vocal support comes from veteran Memphis soul harmony group, the Masqueraders.

In truth I could have done without the frantic ‘Lover’s Compensation’ and ‘A New Song’ but maybe that’s an age thing – mine, not Reed’s! The good news is that there’s plenty to compensate – like the classic 60s flavour ‘Bank Robber’ and the clever title track – the message here is that the things that don’t cost a lot (or maybe don’t cost anything) can inspire love and joy. Can’t argue with that!

Find out more about Eli Reed and this album by accessing our interview archive.