ELBOWED OUT: Everybody Get Up (Soul Junction) 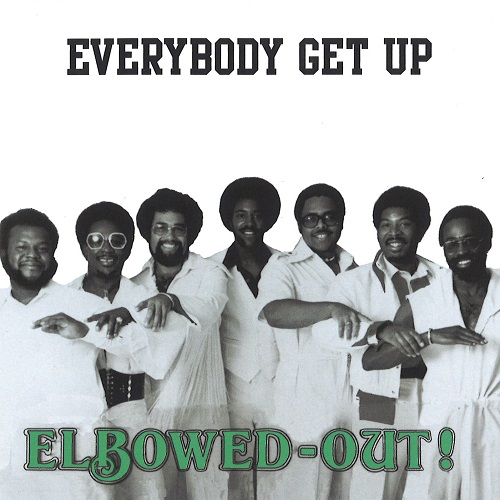 Soul Junction Records are a leading reissue label specialising in digging out quality, ultra rare groove soul tunes and reissuing them on collectable, limited edition 7″ singles. They don’t often do albums, so when they do you know that they’re bound to be worth seeking out and that contention is more than justified with this new long player from the Soul Junction team.

Soul Junction’s latest album is a 9 tracker on an almost unknown Seattle mixed-race group called Elbowed Out. The band was formed in the early 70s by singer/guitarist Dennis Wilcox and singer/trumpeter Sam Chambliss and they soon found themselves a popular feature on the local Seattle club scene playing a set that consisted mainly of soul and jazz covers. After graduating to bigger gigs, opening for acts like Tower of Power and the O’Jays, they came to the attention of Detroit producer Bill Miller (who’d worked with Wild Cherry, the Temptations and the Commodores). Miller had Elbowed Out record a number of tracks but had difficulty getting them released, so the band continued gigging – branching out to Alaska, Canada, even Japan! Elbowed Out finally called it a day in 1991 and that seemed to be that, till Soul Junction Records entered their life!

In 2012 Soul Junction’s crate diggers found two unissued Oliver Cheetham tracks, both produced by the aforementioned Bill Miller. In licensing discussions, Miller offered Soul Junction the tracks he’d cut with Elbowed Out and the team were blown away by the quality of the music. Two Soul Junction/Elbowed Out 7″ singles followed and their success has encouraged the Soul Junction crew to issue a full album on the band…. 9 great, rare soul grooves that prove that label execs and quality control teams often get it wrong.

Four of the tunes here (‘Taking A Step’, ‘Girl You Got Magic’, ‘Things Are Changing’ and ‘Just To Be With You’) were available on the two singles while a fifth cut, ‘In The Book Of Guinness’ (surely the only song to name check The Guinness Book Of Records) was featured on a Soul Junction compilation. If you know those cuts, you’ll know the sound of Elbowed Out is kind of halfway between the Blackbyrds and Tower Of Power …soulful, melodic and gritty with an irresistible hint of funk.

The previously unavailable tunes follow the same music template with ‘All Men Don’t Love The Same’ being particularly strong. Even the 1988 recording (‘Girl I Want You’) which features a somewhat different band line up to the earlier tracks is sonically similar , if a little funkier. Ultimately, it’s all eminently danceable, hence the album’s title cut, an unbridled ‘Everybody Get Up’…. vintage, rare soul of which you can learn more @ www.souljunctionrecords.co.uk