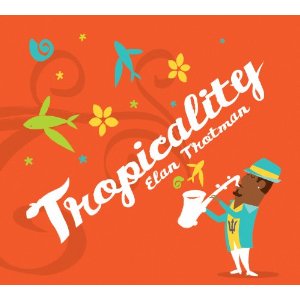 Elan Trotman is a Barbados-born smooth jazz saxophonist and flautist. ‘Topicality’ is his sixth solo album and it features a fine array of sidemen – amongst them guitarists Paul Brown and U-Nam, percussionists Luis Conte and Lenny Castro, keyboardist Jeff Lorber, bassist Alex Al and trumpeter Lin Rountree. Add to those names that of producer Peter White and you’ll know right away that what we have here is a quality smooth jazz album. That fact is apparent right from the start with a polite cover of Stevie Wonder’s ‘Master Blaster’. Trotman and his team don’t stray too far from the original though, as you might expect, they do highlight the tune’s inherent Caribbean flavour. They use the same kind of formula on one of the LP’s other big covers – a take on Bob Marley’s ‘Waiting In Vain’. Flute-led, it’s slowed down just a touch and features a hint of whispered vocals. The other selected cover is Antonio Carlos Jobim’s ‘Wave’. Again it’s flute-led and a touch quicker than the original.

Those covers – Caribbean and Latin flavours all – tell you that ‘Tropicality’ isn’t a particularly adventurous set. Tunes like the breezy ‘Tradewinds’ and the polished ‘A Time And A Place’ are classic examples of modern smooth jazz. Melodic and sleek –they make few demands … but I guess that was Trotman’s intention. The ballads are tad deeper – notably ‘Always With You’ which features some sweet and slinky keys. The only time when Trotman thinks about raising his head above the parapet is with the pacey ‘Island Grooves’. The beats are almost (but not quite) housey and the vocal (semi-spoken) from Chantal Hampton is polite rather than aggressive though the interplay between that vocal and Trotman’s sax lines does, in places, create some tensions.