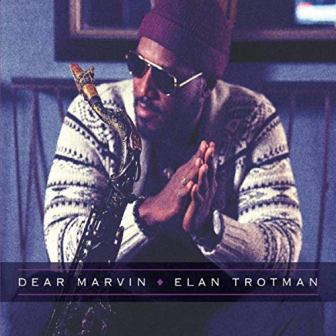 Marvin Gaye’s back catalogue (especially his work from the ‘What’s Going On’ period) has been covered by countless artists – with varying degrees of success, I have to say. Latest to offer his own spin on the Gaye magic is Barbados-born sax man Elan Trotman. Educated at the famous Berklee College Of Music in Boston, Mr T has recorded and performed with plenty of big names – including Michael McDonald, Roberta Flack, Jonathan Butler, Keiko Matsui, Johnny Gill, Jeffrey Osborne, Sheila E, Marcus Miller, Will Downing, Earl Klugh, Jeff Lorber, Peter White and Peabo Bryson. In his own right, he’s enjoyed plenty of smooth jazz chart success and this new 10 track love letter to Marvin Gaye is sure to win plenty of favour too. It’s an undemanding, easy-on-the ear, slickly produced set of covers, very much in the style of Elan’s heroes – Grover Washington Jr, Kirk Whaum and Najee.

And, not by coincidence I’m guessing, Najee is one of the album’s featured guests. He plays flute on a fairly straight cover of ‘After The Dance’. There’s vocal input on this from Tim “Smithsonian” Smith who also takes lead on ‘Sexual Healing’. Other album guests include Patches Stewart whose trumpet graces ‘Distant Lover’, Jeff Lorber who takes the keyboard solo on ‘Trouble Man’ and Jeff Bradshaw whose trombone beefs up ‘I Heard It Through The Grapevine’. Vocalist Ray Greene warbles sweetly on ‘Mercy Mercy Me’ while – offering something a little different – Obodele Thompson raps in old school fashion on ‘I Want You’. In truth that rap is really the only inclusion that takes us away from the original Gaye versions. All the tunes are treated with respect; and why not? They’re great tunes and don’t need to much fussing over and great to hear ’em all over again with Elan’s soulful sax taking over from those much loved, familiar vocals.