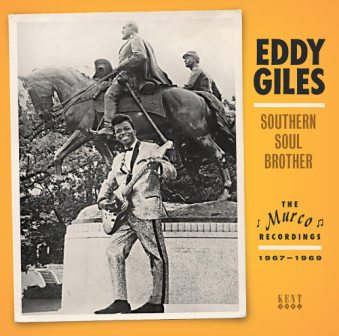 Eddy Giles is the archetypal southern soul man but sadly knowledge of him seems limited to collectors of the genre. Hopefully, that might change with this new Kent retrospective that chronicles Eddy’s time with Murco Records.

Born Elbert Giles in 1938 in the southern soul heartland of Frierson near Shreveport Louisiana, Eddy taught himself guitar and hooked up with a Gospel group called the Humming Bees. He then went on the road with Chicago-based Gospel ensemble, The Pilgrim Jubilees. Marital problems forced him to return to Shreveport and he found a job in a restaurant but to supplement his salary he joined a soul trio called the 3 Corners. He eventually came to the notice of Dee Marais who owned the local Murco label and he stayed there for a couple of years, recording some 18 tracks – all collected here on this aptly-titled retrospective.

The collection begins with Eddy’s best-known song… the sparse but totally charming ‘Losin’ Boy’. It was Eddy’s and Murco’s biggest hit. Soul folk with long memories will remember that Dave Godin championed the song – including it on one of his ‘Deep Soul Treasures’ sets. The rest of the material follows the usual Southern soul trail – rustic, unbridled dancers (like ‘Eddy’s Go – Go Train’) and pleading, passionate ballads (like ‘While I’m Away’). Most of the songs are originals but there’s a great cover of ‘That’s How Strong My Love Is ‘. Everything is delivered with a soulful commitment that might recall Jimmy Holiday with the tough grit of Dyke (of “and the Blazers”) while the musicians mix the usual brassy, bassy Southern cocktail that also highlights Eddy’s chunking guitar style.

After Murco, Eddy Giles moved to Stax (re-recording ‘Losin’ Boy’), then on to Sound City and Custom Sound before deciding to make a return to Gospel. He’s now a pastor in Shreveport and hosts a Gospel show on the same local radio station where he made his first broadcast in the 50s! What comes around goes around!