EDDIE SEA: The Velvet Lounge (Music Of The Sea) 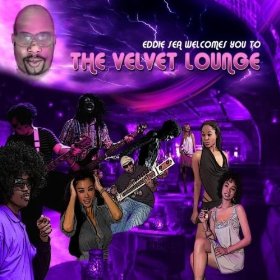 Eddie Sea is a Chicago-based soul musician whose last two albums – ‘Starz’ and ‘Moon City’ – won him fans world-wide with their commitment to old school values. Sea, you see, believes that modern music’s strayed too far from basics and that over-reliance on electronic instrumentation has removed a lot of the passion from soul music. His crusade is to bring that passion back and working like a modern day Norman Connors, Eddie’s assembled a cast of artists and performers to help him deliver his ideas. Like Connors, he’s the ring-master – juggling his singers and musicians to get the best out his material. The concept worked well on both ‘Starz’ and ‘Moon City’ and the good news is that ‘The Velvet Lounge’ surpasses both those albums. Some of the tracks on those first two were maybe a little vague – ethereal, if you would; here, though the music is more consistently grounded and there’s a great vibe running through the 14 tracker.

Asked to define that vibe, I guess anyone with even a modicum of soul pedigree would suggest that the sound of ‘The Velvet Lounge’ is rooted in the 70s… and more specifically the then ground-breaking work of Stevie Wonder. The Wonder connection is most obvious on the songs which feature the intriguingly named Golden Child on vocals. Whoever he may be, he can “do” Stevie better than anyone I’ve ever heard before… it’s uncanny. Hear him to best effect on  ‘Planet Earth.’ After a dramatic opening, it develops into sublime summer groove that Mr. Wonder himself would be proud of. The same singer fronts a number of other tracks of which ‘Divine Lady’ is another very strong cut.

Sea’s other main vocalist is the wonderful Shaunita Toussaint. She was outstanding on Sea’s two other albums and here she continues to excel. Clearly her grounding’s in gospel, as she proves on a half dozen cuts that the art of proper soul singing is still very much alive. By anyone’s reckoning, the vibes-led, ‘It’s That Feeling’ is a wonderful track, while on ‘Mystic Sunset’ she proves she can do slinky too.

Elsewhere Marylin Hearns fronts the crisp modern soul beater, ‘Power,’ while Eddie and his sitar take centre stage on the more experimental ‘Sundara’. It’s a little out of kilter with the rest of the album though the track which precedes it (‘Hurricane’) does prepare the way with its dramatic arrangement. Soulsters with adventurous ears will relish them while those a little more conservative will lap up the rest.