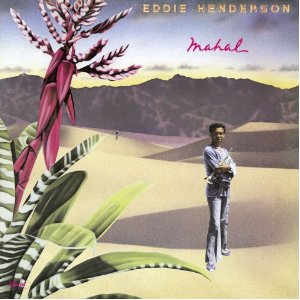 US horn blower, Eddie Henderson (who’s also a qualified doctor of medicine) is fondly remembered in the UK by jazz-funk fanatics for his Top 50 UK chart entry, ‘Prance On,’ from 1978. Though that dance-friendly track has appeared on several compilations in the digital age, surprisingly, its parent album, the Capitol-released ‘Mahal,’ has never been reissued until now. It’s a great little set and finds Henderson – who’s still going strong at 71 – surrounded by a coterie of talented confreres whose presence guarantees quality music: among these are keyboard maven, Herbie Hancock, reed expert Bennie Maupin, flautist Hubert Laws, ex-Head Hunters’ bassist, Paul Jackson, plus ace percussionists Mtume and Bill Summers.

The album bursts out of the blocks with an uptempo incarnation of Herbie Hancock’s ‘Butterfly,’ a song that was originally configured as a ballad. With Hancock on keys, the turbo-charged version works extremely well, setting the tone – and indeed, creative bar – for the rest of the album. As well as the infectious ‘Prance On’ – which gives a nod to disco with its propulsive hi-hat rhythms and crisp beat – the seven-track set includes ‘Cyclops,’ a fat-bottomed, bass-heavy, groove that became popular on the UK club scene back in the late-’70s thanks to the legendary DJ Froggy, who elected to pay the cut at the incorrect speed (for the vinyl heads reading this, he played the LP cut at 45 rpm instead of 33rpm). Amazingly, in the wake of that, Capitol/EMI issued a speeded-up ‘Disco Remix’ of the track, which appears on this reissue as a bonus cut. As well some fine and sinewy uptempo grooves, the album included some delicate mellow moments – like the ballad ‘Emotions,’ the dreamy ‘Ecstasy’ – with cascading keyboards from Herbie Hancock – and the ruminative title track, which also contains some beautifully lyrical playing from Eddie Henderson. For jazz-funk addicts, then, this is a very welcome reissue indeed and its presence on CD is a reflection of Soul Brother’s dedication to reminding the world of long-forgotten but worthy soul, jazz and funk albums.