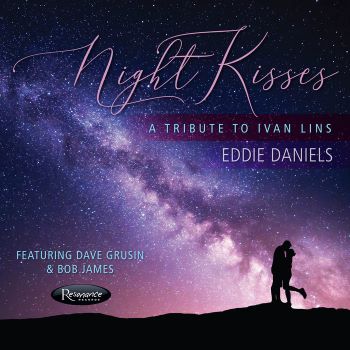 By common consent Rio’s Ivan Lins is the premier post bossa nova first wave musician. Indeed, after Antonio Carlos Jobim, Lins is the most successful Brazilian composer. Since the 80s his work has been covered thousands of times and he himself is a welcome fixture on the world-wide festival and jazz circuit and even those who might not be aware of him will surely know his classic ‘Love Dance’ which, we believe, is one of the most recorded songs of all time.

Amongst Lins’ legions of admirers is George Klabin, president of jazz label, Resonance Records. A year or two back he embarked on a project to help popularise the work of contemporary Brazilian composers by contracting jazz musicians to interpret a particular writer’s work. He began with ‘Heart Of Brazil’ – his tribute to Egberto Gismondi and now with ‘Night Kisses’ he turns the spotlight on Ivan Lins.

To deliver the concept, Klabin has chosen as ensemble leader garlanded flautist/clarinettist/saxophonist Eddie Daniels who’s assisted by the strings of the Harlem Quartet and Josh Nelson (piano), Kuno Schmid (piano), Kevin Axty (bass) and percussionist Maurico Zottarelli. The 13-track repertoire consists of material that Lins composed between 1977 and 1983 – a period of personal and political turmoil for him. (His marriage was crumbling and like fellow Brazilians, he was living under a repressive dictatorship). However, Lins specialists concur that maybe because of the turmoil, he created some of his best work in that period – much in partnership with lyricist Vitor Martins.

Now here’s the thing, all but one of the tunes on this album were originally conceived as songs – a challenge for a team creating an instrumental album. Leader Daniels’ initial reaction was: “What the hell am I going to do with this?”. His answer: “If I’m the lead instrument I have to become the singer. Now here was this music where you just have to be soulful and heartfelt.”

And that’s exactly what Daniels delivers – heartfelt and soulful rendition of Lins’ classics like ‘A Voz Do Povo’, ’Dinoraha, Dinorha’ and ‘Amor’. As an extra attraction (if indeed one was needed), Dave Grusin adds his distinct keyboard skills to three tracks – one of which – the closing ‘Ivante’, also features Bob James. Quite a team! The result speaks for itself… a joyous tribute to a Brazilian maestro.

The lavish accompanying booklet tells you plenty about Lins and the provenance of the tunes. There’s also the English lyrics just in case the music’s inherent joy and beauty moves you to join in… it probably will!