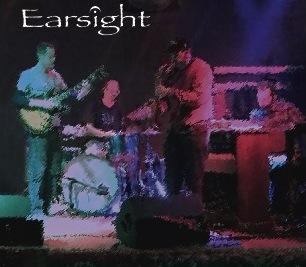 Earsight is a funk n’ jazz quartet from South Carolina. Band members are Adam Knight (guitar), Will Sinclair (Hammond B3/keyboards), Tim Blackwell (drums) and Tom Wright (alto saxophone) and between them they’ve been involved with people like Ellis Marsalis, Wycliff Gordan, Walter Blanding Jr. and Kenny Garret. Gig-wise they’ve had the opportunity to open for a varied range of jazz-based artists … amongst them -Robert Randolph and the Family Band, Maceo Parker, Wynton Marsalis and Incubus.

As an introduction to their sound Earsight have just released their debut long player – though at an economical 6 tracks, maybe better to call it an EP. Small though has its virtues and there’s plenty here for serious jazzers to enjoy with the opener, ‘Working Funk’ maybe best representing what Earsight can offer. At six minutes plus, it’s a bouncy, bassy loose work out which maintains interest throughout. ‘Shell Game’ is moodier and broodier; ‘Thanks (Again)’ is fast… almost furious with a rocky guitar sound; ‘Arc D’Irie is stately, smooth even while ‘Nephew James’ takes it colouring from the soul-jazz palette. These five tunes are all band originals, leaving just the mini album’s only cover – a re-working of Stevie Wonder’s ‘I Wish’. This Earsight version is busy and rightly funky with some great Hammond stabs and Benson-esque guitar.