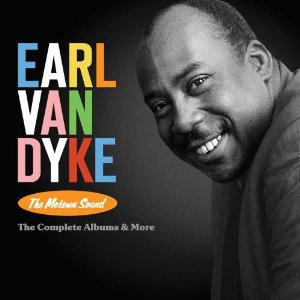 Known as the “chunk Of Funk” in and around his Detroit home, keyboardist Earl Van Dyke was the de facto leader of the Motown house band. Brought to the label by his pal – the legendary bassist James Jamerson, Van Dyke assumed the role after original piano man Joe Hunter quit in 1963. Van Dyke, Jamerson and the rest of the Snake Pit Funk Brothers played on almost all the great Motown classics but despite helping generate over 300 million disc sales the players were still only paid basic rates by the parsimonious Gordy. To supplement their incomes, they therefore indulged in a little moonlighting – playing on sessions in other Detroit studios and even travelling as far as Chicago to supplement their wages. In an attempt to keep the Brothers sweet and more faithful to Motown, Gordy occasionally allowed them to record their own records – a couple of albums and several singles… and it’s those LPs and 45s that form the core of this fabulous 2 CD, 45 tracker from Motown/Hip-O Select and available via Universal/IMS.

The first album -‘The Motown Sound’- was released in 1963 and credited to Earl Van Dyke And The Soul Brothers (apparently Gordy and his bourgeoisie ambitions vetoed the use of the word “funk”). The LP has long been a collectors’ item amongst Motown fans and it’s easy to hear why. Essentially it comprises of the original backing tracks of Motown classics like ‘Nowhere To Run’ and ‘Come See About Me’ with Earl’s Hammond organ taking the vocal parts. The second album was a very different affair and didn’t actually get released till 1970. Entitled ‘The Earl Of Funk’ (Gordy had mellowed a little by now) it’s made up of covers of stuff like ‘Rainy Night In Georgia’ and ‘Stand By Me’ along with a trio of Van Dyke originals. Recorded live in Detroit’s Ben’s Hi Chaparral Club, it allows Earl, Jamerson, guitarist Robert White, drummer Uriel Jones and percussionist Eddie Brown to show off their jazzier and funkier licks.

In between the albums there were a number of singles, variously credited to the Earl Van Dyke Sextet, Earl Van Dyke and The Motown Brass and The Earl Van Dyke Quartet. Best known of the 45s is the bouncy ‘6 By 6’. It’s included, naturally, along with everything else we’ve just mentioned, but as with all Hip-O Select releases the main attraction is in the bonuses and the previously unreleased material. Here these include a trio of rumbling instrumental credited to James Jamerson, a great version of ‘Too Busy Thinking About My Baby’ (the track originally intended for Gladys Knight) and a poignant ‘Ode to Benny B’, which it seems, was meant for the 4 Tops.

As ever with Hip-O, the album comes with an information/picture-packed booklet that only makes the purchase even more essential.