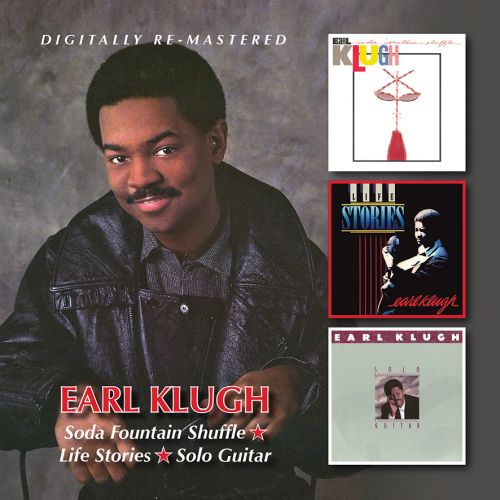 For their latest jazz offering, reissue specialist BGO bring together a trio of Earl Klugh’s 80s albums. They are 1985’s ‘Soda Fountain Shuffle’, ’86’s ‘Life Stories’ and ‘Solo Guitar’ from 1989. All three were recorded by the acoustic guitarist for Warner Bros after he’d left Capitol/Blue Note and the casual listener probably wouldn’t detect any difference in Klugh’s sound here compared to those heady, breakthrough days at Blue Note. Indeed the same causal listener (do you exist?) probably won’t detect too much difference between the music on these three Warner Bros albums – yes, it’s all pleasing, sweet, not-too-demanding, easy-on-the-ear acoustic guitar, smooth jazz… exactly what Earl Klugh is known for.

Klugh fans though (and there are many) will tell you right away that amongst these three albums there’s plenty of variety.

For ‘Soda Fountain Shuffle’ Klugh embraced the new music technologies that were sweeping through studios in the 80s. So for the first time the Detroit-born guitarist used drum machines and synths and at times the hard edged sound that electronic instruments sometimes create is at odds with Klugh’s delicate picking. Though ‘One Night Alone’ stands out for its unashamed romantics.

For ‘Life Stories’ – the first long player he’d produced in its entirety – Klugh went back to live instrumentation – notably bringing in Gene Dunlap on drums. The result is more satisfactory with the overall sound having a cinematic quality. Standout here is a cover of the Isleys’ ‘For The Love Of You’. Such a great tune (probably why so many smooth jazzers have recorded it), Klugh treats it respectfully.

‘Solo Guitar’ –as the name implies – is just Klugh out on his own. Though he’d recorded solo before, this album was the first on which every track was just Earl and his nylon-strung guitar and for those aforementioned Klugh fans it’s a long-time favourite. The material is eclectic and varied – ranging from Disney’s ‘Someday My Prince Will Come’ to ‘If I Only Had A Brain’ from the ‘Wizard Of Oz’ through to Bacharach’s ‘Any Old Time Of Day’ and the lush ‘Once Upon A Summer Time’ .

Notes for this reissue come courtesy of our own Charles Waring and as ever Charles gives you everything you need to know.