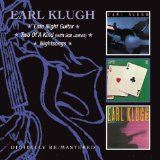 Earl Klugh was there at the birth of smooth jazz. Indeed some of his work – things likes ‘Living Inside Your Love’ – practically define the best of the genre. The unique, nylon string guitar player debuted as a soloist in 1976 with an eponymous album on Blue Note and he’s been prolific ever since. This new BGO reissue allows us to enjoy Klugh in his pomp with a three LP set (spanning 2 CDs) that covers the years 1980 – 1984.

The first album in the pack is ‘Late Night Guitar’. It was the Detroit guitarist’s sixth solo album and was something of a departure from the sound and style that had won him his early acclaim. ‘Late Night Guitar’ – as the title implies – is/was a very laid back affair with Klugh’s solo guitar supported by an orchestra. At first Blue Note weren’t too keen on the project. Studio orchestras were notoriously expensive and the execs saw nothing wrong with the way Klugh had recorded in the past – it was, after all hugely successful. The label bosses eventually relented and allowed Klugh to proceed and he duly delivered a gentle 13 tracker that consisted of standards (like ‘Mona Lisa’) and movie themes (like ‘I’ll Never Say Goodbye’ from the ‘The Promise’). Despite the label’s early misgivings, ‘Late Night Guitar’ was a commercial success – rising to #4 on the US jazz chart, underlining Klugh’s status as a major player.

The second LP in this reissue is Klugh’s second collaboration with keyboardist Bob James. The two had enjoyed success with ‘One On One’ in 1980 –so it was a no brainer for label chiefs to sanction another collaborative efforts and ‘Two Of a Kind’ was duly released in 1982. The six tracker was a different affair to ‘Late Night Guitar’ –more intricate and multi-textured but just as successful. By January ’83, it was atop the US jazz charts.

The third album in this new BGO pack dates from 1984. ‘Nightsongs’ saw Klugh return to the feel of ‘Late Night Guitar’. The 10 tracker was another mix of standards and film tunes (though there was one Klugh original, the title tune) recorded, in the main, by solo guitar with full orchestral accompaniment. Just like the two other albums in this set, it highlights Earl Klugh’s unique qualities as jazz player; no flash; no self-indulgence… just a delicate simplicity and a purity of sound that is easily identifiable as Earl Klugh.

All three albums have been digitally remastered for this release and the pack comes complete with an illuminating and excellent essay from my SJF colleague Charles Waring.