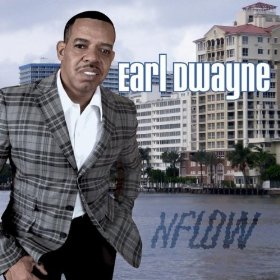 Earl Dwayne hails from New Jersey, where, as a boy, he was a member of the prestigious Newark Boys Chorus. Not only did his participation with the choir lead to world-wide tours, TV work and high profile concerts, but it also bred in Earl a passion for all kinds of vocal music – popular, classical, standards, jazz, soul, gospel and more . Earl went on to study music before graduating to the position as lead vocalist with the acclaimed Lebanon Valley College Concert Chorus. From there he found work as a backing singer – most notably for Will Downing – but he always knew that he wanted to be his own man and he constantly wrote material for his own projects. His first album was 2008’s ‘I’m On My Way’ and it was generally well received. He’s now recently launched this – his second full solo LP and it’s a great understated example of modern soul. Here there’s nothing forced, no gimmicks or histrionics – just good, properly crafted songs, sung well and sympathetically produced. The work – a mixture of laid-back secular jazzy soul and gospel reflections – reveals the depth of his musical background and experiences as outlined above, and as that suggests there’s something for soul lovers of all tastes.

Those who like to dance (albeit sedately) will love the crisp ‘Push Pull’ where the beats are perfect for the modern soul room. ‘I Can’t Get Enough’ is a neat little mover too; pleasing harmonies on this as well. ‘Keep It Moving’ and ‘Nothing Can Separate Me’ are decent too… if a little more mellow. For those who like their music with a message – something to reflect on in a spiritual way – then ‘Trouble Soul’ and ‘So Shall I Be’ betray the singer’s gospel background while ‘In The Flow’ wraps the same kind of message in a jazzy-soul setting. The set also boasts plenty of ballads – like ‘Side By Side’ and ‘Above The Water’ though the best is a wonderful duet – ‘What Good Is A Song’. This is a little bit of an oddity in that the writing and production team are different to anything else on the album and the whole production sounds “bigger” with some great sax weaving in and out of the meldoy courtesy of Bruce Williams. The duettist here, by the way, is Sumya Dabney whose musical background, like Earl’s, is clearly a Church-based one. I’d like to hear more of her. The cut is a quality soul ballad; but then the whole album is full of quality music … a good, no nonsense, modern soul set, this. Earl Dwayne’s ‘N’Flow’ is currently being promoted by www.soulchoonz.com