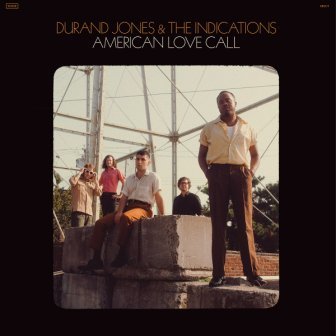 DURAND JONES and the INDICATIONS are a mixed race soul fivesome who formed in 2012 when, as students at Indiana University in Bloomington, they discovered a mutual love for vintage, classic soul music. The quintet are vocalist Durand Jones, drummer/vocalist Aaron Frazer, guitarist Blake Rhein, bassist Kyle Houpt and keyboardist Steve Okonski. The band debuted in 2016 with an eponymous long player that won critical praise for its uncompromising take on the classic soul genre. It was rough and tough and believable … like the great 60s and 70 soul that came out of Stax and other legendary southern studios.

Their ‘American Love Call’ is the follow up and the Indications have subtly change direction without sacrificing any soul credibility. They tell us that the new 12 tracker is “more Gamble and Huff than Sam and Dave” and, for sure, the music here is smoother and the production is bigger but it’s lost none of the impact of its predecessor. ‘American Love Call’ is, by any yardstick, a remarkable modern soul album and commentators and soul tastemakers who’ve enjoyed previews are already singling out ‘American Love Call’ as an album of the year.

The album offers a mix of gritty, thrilling up-tempo material alongside some truly sweet and tender slow jams and that dichotomy is underlined by the fact that the band use two very distinct lead voices. A perfect soul pairing (Temptations anyone?) Durand Jones is a soul singer in the old school tradition and his big, rough voiced contributions add authenticity to the message in the music. Witness the wonderful opener, ‘Morning In America’. This, I’m guessing, has been inspired by Curtis Mayfield’s album ‘There’s No Place Like America Today”. “It’s morning in America but I can’t see the dawn” sings Jones and his delivery and a biting guitar lets you know he means it. The band’s other lead voice is the drummer Aaron Frazer and his thrilling, trilling falsetto takes lead on most of the ballads – like the superb ‘Court Of Love’… no, not the Unifics’ classic, but every bit as harmonically perfect. Frazer’s also out front on ‘What I Know About You’ – shades of the Delfonics, while on the Jones-led ‘True Love’ you might just think of the dear old Impressions. But what this group deliver aren’t pastiches – rather they offer beautifully crafted and honestly delivered modern takes on the classic soul idiom.

Look, I won’t beat about the bush any more. By now, you might have guessed I really love this album. I do. So I’ll conclude by saying that yes, those commentators and soul tastemakers we referred to above are all right. ‘American Love Call’ will be the soul album of the year. I will be very surprised if I come across anything as convincing as this in the coming months. Yes ‘American Love Call’ is hugely, hugely recommended. It’s released March 1st.