DUANE WILLIAMS; These Songs Are For You (Soul Junction) 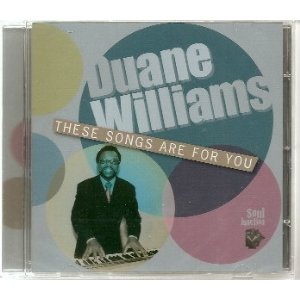 I first became aware of Duane Williams when his delicious ‘Yes My Love Is Real’ was featured on a Soul Unsigned compilation. The song is a great old school mid-tempo groove but the big attraction was the man’s voice. Cracked and broken, it has all the world-weary qualities of the great soul men – most notably Bobby Womack. I needed to know more, and I eventually tracked down the source album (this one) to the Midlands based Soul Junction Records. From them I learned that Duane hailed from Detroit and that his debut in the music biz was as a foil to his wife Beverley way back in the 70s. As a duo they recorded for Detroit’s Fee label before moving to Brown Bomber Records (owned by Joe Louis’ nephew). In the 80s the Williams family relocated to Los Angeles but sadly the pair divorced and Duane found himself back in the Motor City where he hooked up with an old friend Will Hatcher – who found him a recording deal with Soul Junction records and the first fruit was the aforementioned ‘Yes My Love Is Real’ –already a huge modern soul favourite. Between them, Williams, Hatcher and Soul Junction put together this album and since its release some months back it’s been garnering a big reputation on the underground soul scene. Without too much hype, ‘These Songs Are For You’ has slowly won its way into the hearts of the soul cognoscenti and it’s easy to hear why. In a word – it’s the man’s voice. We’ve already described its attractions and even on material that isn’t particularly strong and/or suffering from production budgetary restraints, that voice saves the day. So on stuff like ‘Father We’re Having Trouble’ and ‘I’m In Love’ – where the synth lines and the drum machines sound particularly thin – that great old school soul voice makes both more than acceptable. The good news, though, is that there are some really great songs on here and those songs are produced so that the vocal qualities really shine through. Of course, ‘Yes, My Love Is Real’ leads the way, but ‘What’ Your Name’ is another great mid-tempo soul groove while ‘This Song Is For You’ is a lovely soulful ballad. Standout, though, has to be the perfectly understated ‘Oh Me, Oh My (Wonderful)’ – nothing gimmicky or uncomplicated – soul as it was and how it still can be. Indeed this album is the perfect antidote to those gainsayers who forever say that proper soul just isn’t being made any more. Here’s the proof that it is.