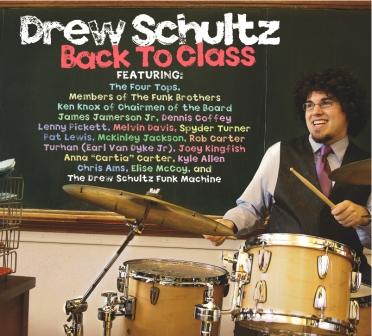 Drew Schultz is a young American drummer. Despite his comparative youth he’s already put together an impressive musical CV. Mentored by Earth Wind and Fire’s Ralph Johnson and Motown Funk Brother, Uriel Jones , the Cleveland native has already played with people like The Temptations, Aretha Franklin, The Dramatics, The Contours, The Chairmen Of The Board and – most importantly – The Four Tops. Drew played drums in the iconic group’s road band for over five years! Now he leads his own band – the Drew Schultz Funk Machine – and they’re kept busy with a regular series of sell-out gigs up and down the East Coast. Now with his Funk Machine musicians, Drew’s put together his first full album and, unsurprisingly for a self-confessed 60s Motown and soul geek, the music is a real throwback to that musical Golden Age – most obvious on the two cuts that feature his old paymasters, The Tops.

First up there’s ‘Crying In A Whisper’ – a song and performance that could slip easily into the group’s canon. It has all the classic elements that made the Tops’ hits so memorable – hardly surprising since Schultz has worked constantly on all those hits for five years. Their other contribution is the more laid-back ‘What I’d Do For You’. It’s not quite as memorable as ‘Crying’ but in the absence of any more new music from Duke and the boys, it’ll help satisfy the fans. Another album high spot is ‘So Many Fish In The Sea’. This features a great Holland-Dozier-Holland style intro which sets up a pleasing, light dancer with vocal from Ken Knox of the reincarnated Chairmen of the Board. Other featured vocalists on the album include Spyder Turner, Melvin Davis, Pat Lewis and Chris Ams. Ams takes lead on the brassy ballad that is ‘Not Enough’ and duets with Elise McCoy on another great slow burner, ‘Shipwrecked’.

The album also features a couple of blistering instrumentals from the Funk Machine. They’re out on their own on ‘Slouch Potato’ –a down and dirty groove while on the bass-led ‘Jamo’ they’re augmented by Dennis Coffey, Lenny Pickett, Earl Van Dyke Jr and James Jamerson Jr. For even more variety there’s an acapella track ‘This is Now’ while the whole thing ends on a poignant note with the album’s title track. On ‘Back To Class’ surviving members of the original Funk Brothers – Eddie Willis, Dennis Coffey, Jack Ashford and Uriel Jones (who sadly died just after the recording) offer their reminiscences of the whole Motown thing over a subtle Funk Machine backing track. You can find out more about this album @ www.DSdrums.com … also check our news and interview archive for more details about Drew Schultz and ‘Back To Class’.