DR RUBBERFUNK: My Life At 45 (Jalapeno) 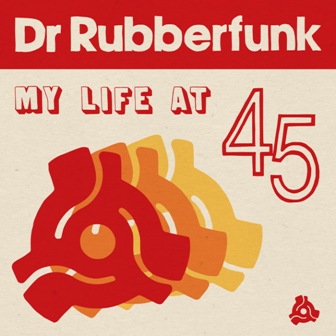 Simon Ward is a UK producer and DJ and in 1992 he assumed the mantle of “Dr Rubberfunk”.  In that guise he’s enjoyed some success –notably with three albums…. ‘The First Cut’, ‘My Life At 33’ and ‘Hot Stone’.  He’s also in demand as a re-mixer but over the past 12 months or so he’s been pursuing a new project… a series of 7″ singles under the collective title. ‘My Life At 45’. The last one was released in January and the funky ‘Boom’ which featured the vocals of John Turrell sold out… the singles were all limited editions.

Now the nice people at Jalapeno Records have collected the 12 singles that featured on the 6 45s and popped them onto one concise little CD… makes sense? Sure.

The aforementioned ‘Boom’ kicks things off. Like we said it’s a funky workout with an interesting story line… the tale of man who has burned the candle at both ends, leaving him with just his recriminations! The collection features 4 other vocals and I guess pride of place goes to the cuts that feature Izo Fitzroy – currently riding high with her own ‘How The Mighty Fall’ LP. Here she fronts ‘A Matter Of Time’ and ‘A Little Blahzay’ – both showcase Ms. F’s sultry, bluesy world weary vocals.  Stephanie Whitelock leads two tracks too. ‘With Love’ is a dramatic, soulful ballad while ‘Laid Bare’ boasts an almost Amy Winehouse/Daptone sound.

The LP’s other chief guest is sax man Ben Castle who is let loose on the meandering ‘Canvas Cathedrals’. Amongst the other instrumentals is the interesting ‘How Beautiful’ which boasts a guitar sound and  riff that harks back to Shaft’s ‘Cafe Reggios’ (just a bit faster) , a deep bass line and an  anonymous velvety spoken  voice that (I think) was used over and over on various Ibiza Cafe Del Mar cuts. Like I said “interesting”. ‘Longshore Drift’ takes it’s inspiration from chill too but elsewhere the sound is funk and jazz/funk. Out now.