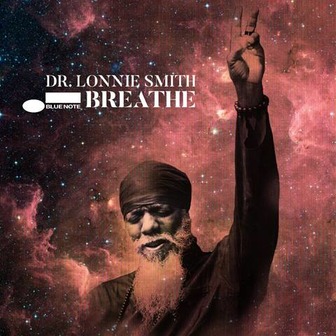 Pairing veteran soul-jazz organist Lonnie Smith with proto-punk rocker and former Stooges’ frontman, Iggy Pop, is an unlikely, almost surreal, musical partnership but it’s one that works as the two tracks that bookend ‘Breathe’ attest. Apparently, Pop attended a few of Smith’s shows in Florida and sat in with the group playing percussion; they enjoyed collaborating so much that they ventured into the studio with producer Don Was to cut ear-catching versions of Timmy Thomas’ ‘Why Can’t We Live Together’ and Donovan’s ‘Sunshine Superman.’ Pop, whose weathered voice is craggier than Mount Rushmore, has never sounded so soulful as on these two sides.

Those couple of noteworthy tracks open and close an album that otherwise is made up of live recordings; capturing Smith and his band on stage for his 75th birthday concert at New York’s Jazz Standard venue in 2017. Of the live material, ‘Bright Eyes’ – featuring elegant horn charts and the nuanced comping of guitarist Jonathan Kreisberg – stands out. Smith works his trademark Hammond B3 in a less flamboyant way than the celebrated organ grinders of old (think Jimmy Smith), playing with great subtlety and bringing an almost orchestral touch to the instrument. He’s adept at creating atmosphere, too, as the mournful but delicate ‘World Weeps’ shows. When he serves up a funky groove, though, no one can touch the self-proclaimed “Turbanator,” whose syncopated revamp of Thelonious Monk’s classic bebop-era tune ‘Epistrophy’ displays great imagination. Although Dr Lonnie Smith will be 80 next year, as this excellent offering reveals, musically he’s in the prime of his life right now. Medicine for the soul.